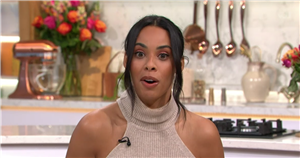 Rochelle Humes has horrified This Morning viewers by making a "gross" snot confession live on air.

During a discussion regarding back to school illnesses which parents should be aware of with Dr Zoe Williams, Rochelle made a nauseating confession.

As Dr Zoe disclosed that she had 'heard of parents sucking the snot out of their babies noses' during periods of illness with the common cold, Rochelle said: "I've done that."

Zoe replied: "I was gonna say. I always thought it was a bit gross but not with my own baby."

Rochelle then added: "Everyone in the gallery is saying 'really?'

"I'm such a sort of squeamish person but you have your own baby, and she was a tiny baby at the time, and I didn't know what to do.

"Then, my friend sent me [something] and said 'there are things invented for that, Rochelle'."

While Alison and Dr Zoe laughed at the anecdote, viewers were grossed out by Rochelle's confession.

One commented: "Well, that’s just put me off my Apple."

Meanwhile, an amused viewer wrote: "You lot are cracking me up today."

"Years ago we used cotton buds to get the boogies out of babies' nose," another concluded.

Zoe then informed viewers that there are saline sprays and nasal aspirators which "saves you having to suck [the snot] out with your mouth".

Rochelle was joined by Alison for the first time this week, having presented Monday and Tuesday's shows alongside Eamonn Holmes.

Speaking previously, Alison revealed the reason for her absence was illness.

This Morning airs weekdays at 10 am on ITV.