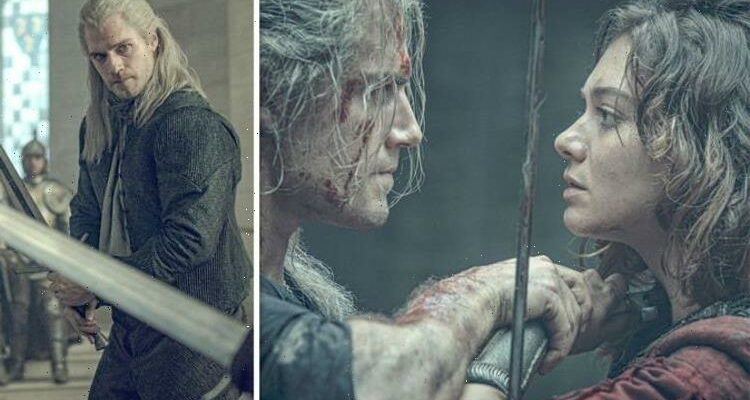 Netflix series The Witcher is back after season two made its big debut after the release date was pushed back due to the pandemic. The Man From U.N.C.L.E and Superman star Henry Cavill again donned the mantle of the eponymous hero in the drama, which has been written by Lauren S. Hissrich. The Witcher plunges audiences into the mythical world of the Continent along with the mythical creatures which inhabit it.

How did Geralt become a Witcher?

WARNING: This article contains spoilers from The Witcher

Along with creatures such as beasts, the Striga, and the Sylvan, there are also Witchers.

Early on in the drama, Geralt of Rivia arrives in Blaviken where he’s met with suspicion.

He gets quite the frosty reception when some of the locals warn him his kind isn’t welcome among them.

While the show continues to follow Geralt’s journey, it’s only towards the end of the series when people get a deeper insight into his backstory.

As Geralt drifts in and out of consciousness, viewers are shown flashbacks to his past when he was abandoned by his mother abandoned him as a child.

The finale sees Geralt as a child left on the doorstep of an old Witcher called Vesemir (Theo James), who must train him to become a fearsome warrior like himself.

Geralt is scared but has no other choice and under Vesemir’s tutelage, he becomes a Witcher.

Later in the episode, Geralt makes a comment about his eyes, suggesting he underwent a transformation similar to Yennefer of Vengerberg (Anya Chalotra) when she became a mage for the Brotherhood.

He even suggests the procedure is monstrous, simply asking: “Do you know what they do?”

This seems to suggest, Witchers were made rather than being born with mutations in the first place.

Geralt also hints he’s one of a few Witchers left on the Continent, suggesting something bad might have befallen his kind.

Generally, Geralt seems to be a do-gooder who is misunderstood and feared by others because of his immense power.

The first episode illustrates perfectly the climate of fear he creates by his mere presence.

How do you become a Witcher?

To become a Witcher, one must be trained in swordsmanship and other skills.

They are also said to undergo an alchemical process which triggers mutations in their bodies to give them immense strength.

Witchers also have night vision which aids them in battle and maybe why Geralt is able to fight the Striga so successfully in pitch blackness,

They are also much more agile and stronger than a normal human as well as having quick reflexes.

Another skill is magic which Geralt possesses and uses to help him during his adventures.

Just like Yennefer trades her fertility to become an immortal mage, Witchers are also sterile and cannot have children.

Season two has already been commissioned by Netflix and is likely to show more of Geralt’s skills as a Witcher.

The Witcher is streaming on Netflix now