Ever since his halcyon days at Nine around the turn of the millennium, Karl Stefanovic's journalisting chops were always just part of his appeal. 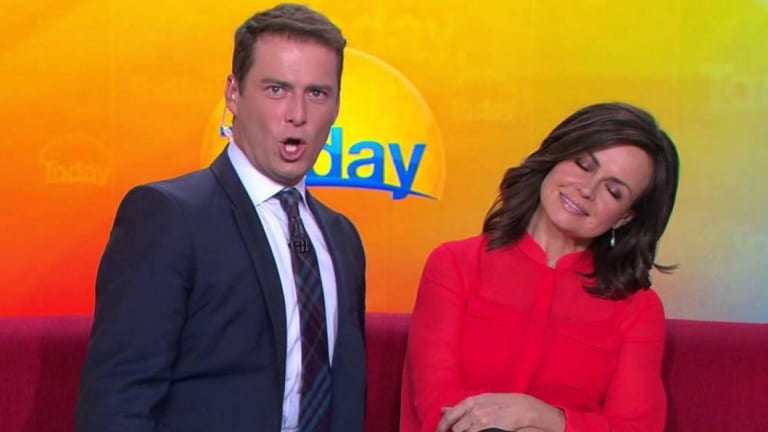 Stefanovic, with Wilkinson, in happier times.Credit:Nine

Graduating from the Queensland University of Technology in 1995, Stefanovic scored his first gig as a cub reporter at WIN Television in Rockhampton, where he first met former wife Cassandra Thorburn.

After a short stint in Auckland at Television New Zealand and an entertainment hosting gig on Optus' short-lived Movie Network news show Cinema, Cinema, Cinema, he was reporting at Channel 10 in Sydney, and playing backup to newsreader Ron Wilson. At 10, he won a Queensland's premier award for his coverage of the Childers Palace Backpackers Hostel fire tragedy in September 2000.

It brought him to the attention of Nine, who signed him up the same year. He was an instant favourite at the network, filling in as host on its weekend news bulletin and even seeing his name raised alongside the likes of Jamie Durie and David Reyne as a potential host of its local Survivor offering (the gig went to 60 Minutes journalist Lincoln Howes).

In 2002, Stefanovic moved to Nine's Sydney office, and in May that year married Thorburn, then working as a freelance reporter with Nine's Extra. The following year he was assigned to Nine's Los Angeles bureau, where he spent 13 months covering events including the Oscars, Ronald Reagan's funeral and David Hicks' internment at Guantanamo Bay.

In the meantime, he'd been groomed to take over the role that would make him a household name. In July 2004, he began filling in for Today show host Steve Liebmann, the morning stalwart already suffering at the hands of new kids Sunrise.

The gig was made official in January 2005, when Liebmann stepped down after suffering a mild heart attack, and Stefanovic took over as host alongside Tracy Grimshaw.

At the time, then Nine boss David Gyngell called Karl – then 30, with a second child to Thorburn on the way – "an impressive young man and a talented news man and television presenter. I have great expectations of him."

A Herald report on the announcement again noted Stefanovic's "appeal to women" – although it took a few years to latch on.

In Stefanovic's first week, the show averaged 215,400 viewers, down from 225,200 viewers the week before (Sunrise was pushing 302,000 viewers). The Australian reported a gag going around Seven that "Karl Stefanovic and his mum were hosting Today", despite a similar age gap – 13 years – between Sunrise hosts Mel Doyle and David Koch.

TV critics weren't kind either, calling Stefanovic "wooden" and "incapable of light banter". By August of his first year on the gig, there were rumours both Stefanovic and Grimshaw would be dumped in favour of Peter Overton and Nine's fantasy recruit Juanita Phillips.

Nine, meanwhile, weren't shy in their publicity efforts with Karl, trotting him all over the network.

In 2006 he had a stint on Nine's Dancing On Ice, where he finished runner-up to some model. He was live at at Will and Kate's wedding, onboard a yacht in the Sydney to Hobart. I remember appearances on the NRL Footy Show, where the Today newcomer was routinely emasculated by the show's hosts, and took it rather well in red-faced jest.

One week he was in the news speaking about the school bullying he copped over his "wog" name, the next – perhaps, most memorably – he was drunkenly giggling at breakfast viewers following a post-Logies bender.

That May 2009 performance was a turning point for Karl's Today stint, narrowing the gap to Sunrise to just 50,000 viewers, his turn as jovial mischief-maker backed by the public.

In 2014, when he broke news of his "sexism test", declaring he wore the same "cheap Burberry knock-off" suit on-air every day for a year to make a point about the double standards levelled at the sartorial choices of his female colleagues, he was christened an ally by feminist commentators across the globe.

Unfair or not, one can understand the betrayal that the show's viewers – traditionally female, just as Stefanovic's backers since that early stint on Nine – felt when he announced his split from Thorburn, his wife of 21 years, just two years later. Thorburn's side of the story – a supportive wife who sacrificed her career, only to be cast aside – had its own resonance.

When Stefanovic emerged mere months later with model/shoe designer Jasmine Yarbrough wrapped around his torso, and then in February announced his engagement, his fate on the show was pretty much sealed.

By August, Today had suffered its worst ratings in at least four years. The Ubergate incident and the photos of playboy parties on James Packer's yacht are all footnotes. With Stefanovic losing the goodwill of his core supporters and the numbers telling the tale, Nine had the ammunition needed to send him off.

As a fan, it's unfortunate – Stefanovic was one of the more entertainingly unpredictable personalities on local TV, especially in the brain-suck that is morning television. This isn't an obituary, he's still working on This Time Next Year for Nine – but let's be honest (nods towards new corporate overlords), nobody watches that.

It's perhaps fitting, at least, that the thing that ultimately tipped everyone over the edge was that most despised of institutions: a destination wedding. You did that to yourself, bro.