The opening titles to Jon Stewart’s Apple TV+ series start with a squiggly old tube TV set. Title after potential title appears on the warped screen, before being torn away like the discarded top sheet of a notepad. “The Weekly Show” becomes “The Monthly Show,” “The Annual Show,” and “The Money Grab Show.” When the 4:3 television expands into today’s typical widescreen format, “America” scrolls across in big, block letters like the title card in “Rocky” — before tacking on an apostrophe and turning into “America’s Next Top Stewart.” “A Fine Mess,” “Shit Show,” and even “I Want to Believe Jon Stewart” eventually give way to the actual name: “The Problem with Jon Stewart.”

It’s a nifty little sequence, featuring presumed shout-outs to the show’s lengthy development cycle (remember when Stewart’s next show was animated and headed for HBO?) as well as guesses as to how the comedic news host’s return to TV may be perceived. But rarely is a debut hour of TV so upfront about its most prominent hang-up: “The Problem with Jon Stewart” is having an identity crisis. Unsure of its place in a vast news world and reluctant to lean into its host’s established strengths, the early problem with “The Problem” is that it doesn’t know what it is yet, even after Stewart’s six-year departure from desk duty.

Judging the long-term quality, let alone the lasting impact, of any news show (or new show, for that matter) based on its first two episodes is damn near impossible. Typically, it’s easier to gauge potential, since usually you’re dealing with a personality, format, or idea that’s still introducing itself. But when it comes to “The Problem with Jon Stewart,” we know the potential; the potential is why people are already paying attention, because that potential was already realized on “The Daily Show.” Stewart’s timing, insight, and dogged pursuit of clarity in an increasingly opaque world connected with audiences who wanted a news host to entertain them as much as they wanted one who would cut through the bullshit. People didn’t want to keep up with the 24-hour news cycle; they wanted to know what they needed to know, without having to work to find it, and without it ever feeling like work when they did.

Over 16 years on Comedy Central, Stewart helped change how news was consumed, and in the six years he’s been off the air (albeit writing and directing the feature film “Irresistible” and intermittently guesting on “The Late Show with Stephen Colbert”), his team of correspondents continues to carve out fresh programs driven by their distinct personalities. Samantha Bee, John Oliver, Hasan Minhaj, and Stephen Colbert but are a few “Daily Show” alumni from Stewart’s era that have made an impact on today’s comedy-news genre, and it goes without saying that Trevor Noah has proven himself a more-than-worthy predecessor to the flagship series.

After the title scroll stops and the episode itself rolls out, you can feel Stewart fighting for his own space in that not-so-tiny TV box, searching for the thing that will make his latest endeavor significant. Transparency is still a high priority, and each episode opens with the host and executive producer sitting in the writers’ room with showrunner Brinda Adhikari, head writer Chelsea Devantez, and other contributors as they outline the episode’s already-chosen topic. The first episode takes on “The Problem with War,” specifically highlighting America’s wretched track record when it comes to providing healthcare to veterans in need.

Soon enough, Stewart is sitting behind the desk again, twiddling his pen and flipping through his notes. The suit and tie are gone in favor of a collarless gray jacket and plain, muted t-shirt, but he sets up the problem at hand in familiar fashion: News clips are cut into a quick montage, Stewart cracks a joke or two, outlines the issue a bit further, and then he sets up the next set of clips. Throw in a few excerpts from print stories and explainer-esque graphics packages, and presto: You’ve got the show. 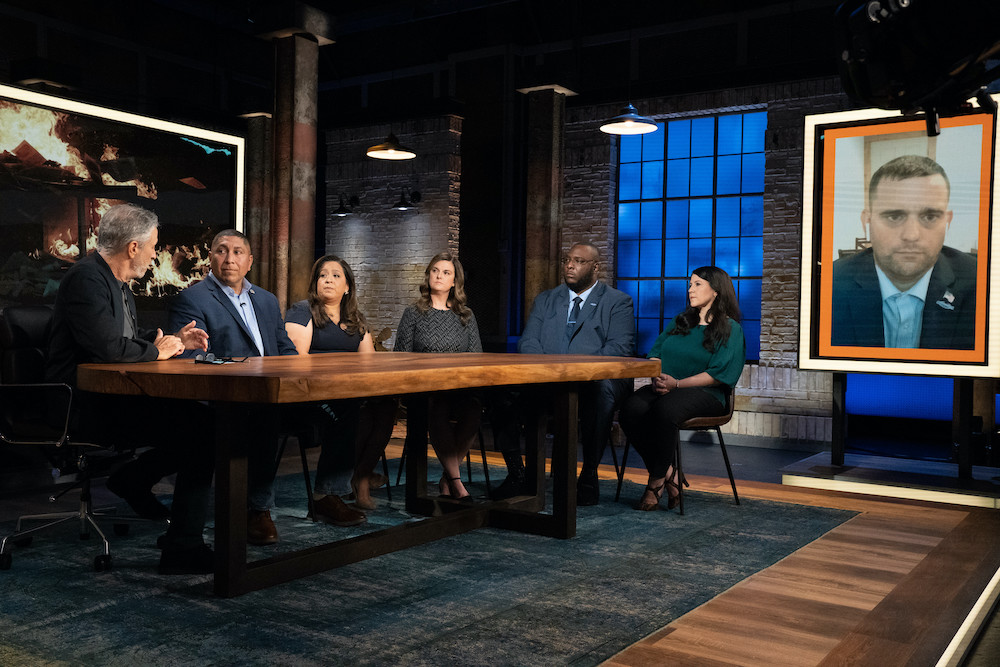 “The Problem with Jon Stewart”

Except Stewart keeps going. In the second segment, Stewart — still sitting at the wooden table slab — welcomes in-person and virtual guests to offer their first-hand experience. In theory, hearing about debilitating health issues of actual veterans should make the “problem” that much more personal to viewers, and these early guests do speak with passion, authority, and insight about their history with burn pits and struggles with Veterans Affairs. But to those watching at home, they’re still talking heads on TV — they’re real, of course, but no different from the people introduced via clips from preexisting news reports. Plus, those clips were hand-selected from years, if not decades, of media content and have already been edited to feature the most critical comments; in comparison, the in-studio guests can feel either too hurried (as if they’re being rushed into their best quotes) or overlong (when they repeat information already shared in the first segment).

Stewart clearly cherishes this form of direct, in-person communication, but these discussions feel like a better fit for “The Problem’s” companion podcast. In the second episode, “The Problem” spends 22 minutes with the guests, whereas the first episode splits the segment with an interview from the field, when Stewart sits down with Denis McDonough, the Secretary of Veterans Affairs, and tries to get answers as to why so many members of the armed forces can’t get coverage for life-threatening illnesses. The talk itself is something to behold, as McDonough tries to match Stewart’s intense sentiments with zeal of his own, but the bulldog approach doesn’t yield any revolutionary answers or discernible progress; the episode’s “problem” is still mired by bureaucracy.

As frustrating as further confusion can be from a host so keen on eliminating it, perhaps more concerning is how badly “The Problem” blends humor into its earnest pieces. Since there are no commercials on Apple TV+, Stewart’s first “break” cuts to a bit titled “How to Cook Your Own Burn Pit,” where the dedicated host pretends to put a bunch of stuff into a metal tray before lighting it on fire… which we’d just seen happen for real in news clips. Oof. The writers’ room conversations are fine, but there’s a reason those spaces are kept private (and it’s not because watching people write jokes is funnier than seeing the finely honed final product). Episode 2 (finally) features a dynamite pre-tape that rides Jennifer Lewis’ ferocious energy to success, and Stewart can still read a studio audience with the best of them. Still, he’s clearly finding his feet when it comes to building rhythms and feeling safe enough to infuse spontaneous commentary. “The Problem” needs him to get there, and fast, if it wants to keep audiences hooked with bits of sugar throughout 44 minutes(!) of medicine.

On the other hand, perhaps Stewart doesn’t want to make another comedy-news show (though that’s how he describes it in the writers’ room); maybe “The Problem” will just become a more traditional news program, like Apple’s version of “60 Minutes.” But if that’s the case, it still needs tightening. Carrying those extra 15 minutes, “The Problem” drags; its monologues need honing, its jokes, if they stick around, need punching up, and its segments need to be trimmed down to the essence. Moreover, releasing new entries every other week seems like a recipe for disaster — keeping track of new episodes isn’t easy these days, and this isn’t the type of show where you can wait to binge, that much is clear already.

“The Problem with Jon Stewart” admirably tries to widen the focus beyond its host; from including the writers’ voices to elevating guest interviews over anchor segments, the new show wants its stories and subjects in the spotlight more than anything. But until the series figures out how to distinguish itself beyond the rest of TV in order to better serve those “problems,” it won’t achieve the impact it desires — or anything close to what Stewart found before.

“The Problem with Jon Stewart” premieres Thursday, September 30 on Apple TV+. New episodes will debut every other week.