The Peripheral is about to take virtual reality to a whole new extreme.

In Prime Video’s latest sci-fi soirée (the premiere is now available to stream, with new episodes dropping on Fridays), a small-town young woman named Flynne Fisher (Chloe Grace Moretz) gets her hands on a futuristic gaming headset that ultimately puts her and her family in danger. What she at first assumes are fictional realities begin to feel more real than ever, as she and her brother quickly learn that the system they’re beta-testing is not just a game. It’s far more dangerous than that.

Read on for a recap of Episode 1 (and be sure to check out Dave Nemetz’s review here).

In London 2099, a guy named Wilf is sitting on a park bench watching the city around him, as a young girl named Aelita (who seems to be an avatar?) sits down. He says she saved his life; she says she’s going to save the world (but not “our world”). It’s all very cryptic and purposely so. 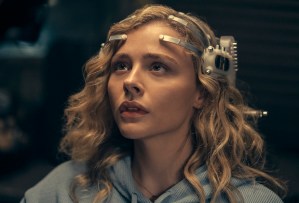 Somewhere in the Blue Ridge Mountains in 2032, we meet Flynne, a young woman taking care of her ailing, bedridden mother. Her brother Burton lives in a trailer outside and is strapped into a diesel gaming chair, VR goggles and all. The duo test videos in order to afford life, which includes their mother’s very expensive medications. When Burton lets his sister take the hot seat, we see Flynne is quite the gamer herself.

Flynn works at a 3D printing company, where her co-worker says Burton received a “remote piloting gizmo.” The package contains components that don’t even have patents yet, and since the customer requested a chain of custody, Flynne has to scan her eyeball to bring it home.

Burton is hired to beta-test this cutting-edge VR concoction, and the longer they play, the more they’ll earn. We learn that Flynne’s gaming skills do, in fact, surpass her brother’s, so he needs her help with the testing. She begrudgingly agrees and puts the sucker on her head. There’s no screen on the device, but when she counts back from 10, she’s speeding through London at night on a motorcycle. A voice asks if it’s like other sims she’s experienced, but it’s not; she can feel everything happening to the avatar (which is currently her brother in the simulation). The voice directs her to Buckingham Palace and tells her to walk inside.

A company party is taking place, and she’s told to approach a woman named Marielle and convince her to take her home. Flynne makes quick work of the task. She’s then ordered to knock the lady out with a mysterious substance in an ampoule, but as soon as she does, she’s attacked by the robotic driver. There’s a violent tussle, but Flynne is able to take it out and hop in the driver’s seat. She pulls into a new location and meets the woman who’s the voice inside her head. After a few cryptic what-ifs, the woman says they’ll resume the mission tomorrow. 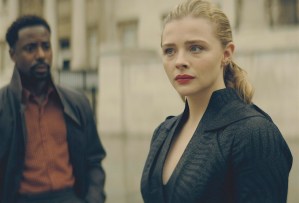 Flynne comes out of the sim and she’s on a high, that is, until she gets dizzy and needs to sit down. When she recovers, she goes to a bar to cop some pills for her mom, but she doesn’t have enough cash. Conner, an amputee, comes to her defense, and by the way he talks, he’s not one to be messed with. The drug dealer and his cronies finally give her what she needs. Inside, the dealers’ boss isn’t happy they were taken to task by a drunk, handicapped man. He smashes his employee’s face into a glass for making him look weak.

When she heads back to see her brother, Flynne sees that he’s crippled over in pain; his back is adorned with glowing spots and pulsating veins. The next morning, her mom reveals that Burton’s been giving her his extra pills. Seems this family can’t ever catch a break.

Flynne goes into the simulation once again, and this time she wakes up (still as Burton) on an operating table. There’s an eyeball in a jar and the woman from last time orders people to pull “Burton’s” eye out and replace it with the jarred eye. (Hope you’re not squeamish!) Flynne wakes up in a car. They arrive at a building and with the new eye, Flynne is granted access. They take an elevator down and enter a long hallway. They’re followed by a man looking to kill them. He calls the mystery woman “Aelita,” and takes her down with a sonic boom device thingamajig. “Burton” realizes his hand looks robotic, and while he tangoes with the bad guy, Aelita escapes. “Burton” takes a sonic boom to the head, and when that happens, Flynne wakes up and vomits. “Never again!” she yells.

The next day, she tells her friend Billy about the new tech. “I can’t help but think I was actually there,” she says. “Not just in another sim.” Well, that’s a bit unnerving, innit?

While at work, Flynne receives a pinge on her SmartWatch by Wilf, who tells her she’s in grave danger and that she  must sign back into the simulation. She tells him to not call her again. While closing down at work, Wilf contacts her again through the store’s tech. He says her family is the target of a contract killing, and he can’t assist her unless she signs back in. She grabs her stuff and flees. When she tells her brother and his friends what happened, they laugh it off. For hahas, they fly a drone up to see if anyone’s around them, and find a group of men hiding in the woods. And I don’t know what exactly those men launch toward the Fisher home (some sort of explosive device?), but it can’t be good.

Did The Peripheral wow you? Grade the premiere below, then drop some comments!