Roman Coleman (Matthias Schoenaerts) is the kind of man who would get into a fistfight with a horse. In fact, that’s exactly what the bald-headed bruiser does the first time he’s placed in a round pen with the unruly mustang who he’s been assigned to tame and prepare for auction. Never mind that the stallion weighs upwards of 1,000 pounds, or — for that matter — that horses don’t have fists; Roman only knows how to express himself through violence. That’s why he’s been locked up in the Northern Nevada Correction Center for the better part of a decade, and why his long prison stint has frequently been interrupted by stretches of solitary confinement.

“I’m not good with people,” Roman growls at the prison psychologist (Connie Britton) who tries to help ease him back into the general population. It would seem that he isn’t any better with animals. And yet, he recognizes himself in that one rambunctious bronco; he can’t help but relate to another living creature who puts up that much of a fight. And over the course of Laure de Clermont-Tonnerre’s poetic and elemental feature debut, these two feral beasts will tame each other as best they can.

Unfolding like a powerful cross between “Lean on Pete” and “The Shawshank Redemption,” “The Mustang” begins by informing us that 100,000 wild horses still roam the Western United States, even if the Bureau of Land Management contends that the country can only support a fraction of that. The government’s solution: adoption and euthanasia. Every year, however, a small number of horses — maybe the ones who are too fierce to be domesticated, but too full of life to put down — are selected for the Wild Horse Inmate Program, where convicts are tasked with training the horses and preparing them for auction (this is a real initiative, and several of its graduates appear in the film with prominent speaking roles).

It’s never easy to break a wild animal, but the prologue of Clermont-Tonnerre’s film wordlessly expresses how difficult it can be, as a (very) low-flying helicopter is used to steer the herd into a small pen, its blades slicing through the air just a few mere feet away from so many unkempt manes. It’s a visceral introduction — our first glimpse of the rugged Nevada mountains that cradle the jail and cut it off from the world — and one that conveys the raw energy that’s contained by any kind of prison.

It’s the kind of barely suppressed power that Schoenaerts has embodied since his breakout performance in “Bullhead” — even in his more docile roles he often seems as though he’s threatening to burst out of his own skin. Clermont-Tonnerre’s script, co-written with Mona Fastvold and Brock Norman Brock, taps right into that impotent rage, while also reducing Roman to a little kid who isn’t in control of his own emotions. It seems like a minor miracle every time he manages to grimace through an interaction without hurting himself or someone else; each instance is as warmly unnatural as the scene where a severe thunderstorm rolls over the yard, forcing all of the horses into the prison’s kitchen for safety. Schoenaerts has never been better. 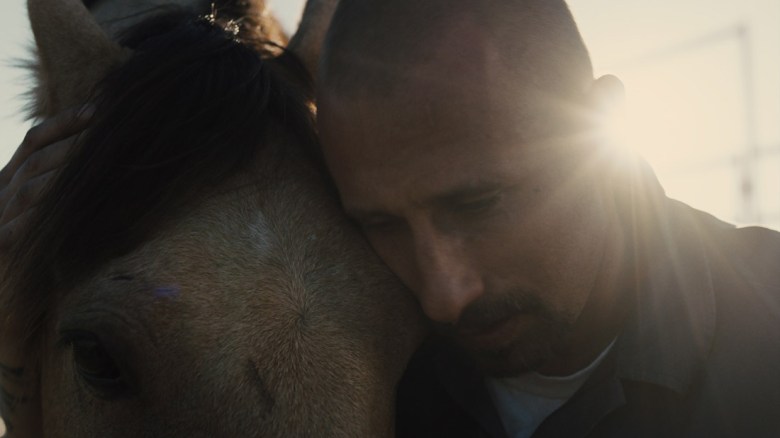 This is a short but patient film that’s filled with evocative imagery and always fully invested in the moment at hand (at one point, the entirety of “The National Anthem” plays as the camera watches the prison horses bristle under their tense riders), so it’s easy to forgive a very spare narrative that doesn’t always earn the change it claims to instigate in its characters.

“The Mustang” is much stronger at the start and the finish — at the extremes of its emotions — than it is at navigating between them. The first scene between Roman and the horse he later names Marquis is especially powerful. It almost feels like an homage to the opening bit from “Jurassic Park,” as the stallion is stuck inside of a dark enclosure and doing serious damage to anyone dumb enough to get too close. The prisoner is so obviously electrified by that anger that the old coot who runs the program (a delightfully abrasive Bruce Dern) insists that he be a part of it. If Roman can break this horse, maybe he’ll be able to break himself. Judging by the way he snaps at his pregnant teenage daughter (“Blockers” star Gideon Adlon), he has a long way to go.

Getting there isn’t going to be a smooth process, and “The Mustang” runs in circles when it means to push Roman in the right direction. Britton is largely wasted, as is Jason Mitchell in the role of a more experienced inmate who functions like a mascot for the program. A drug-smuggling subplot never rises above a means to an end, even though the script avoids getting too bogged down in that drama, and avoids so many of the exhausted tropes you expect to see in a movie that almost never leaves the prison grounds.

By shooting in an abandoned (but well-preserved) Nevada jail, Clermont-Tonnerre captures such a vivid sense place that Roman’s world almost feels immune to cliché. Roman himself isn’t always so lucky, as the character is more of a type than he is a nuanced human being, but Schoenaerts makes a hearty meal of the man’s frustrations, and of his unspoken awareness the total redemption isn’t necessarily realistic for someone guilty of his particular offense (pulling the same trick as Showtime’s recent “Escape at Dannemora,” Clermont-Tonnerre waits until it’s earned a measure of empathy for its protagonist before it dropkicks you with the gory details of their crime).

A tense prison drama that’s penned into the trappings of a classic Western, “The Mustang” is a small movie about a subtle transformation, but its closing moments — however contrived they might be — are as touching as they are unexpected. Some horses can’t be broken, but Clermont-Tonnerre’s spirited debut reverberates with the feeling that even unforgivable men can be fixed.

“The Mustang” premiered at the 2019 Sundance Film Festival. Focus Features will release it in select theaters on March 15.