The first season of “The Marvelous Mrs. Maisel” is one of the streaming era’s most perfect stretches of television — the kind of once-in-a-generation Hale-Bopp of a comedy that can only happen when a singular talent is given a blank check to make her dream project a reality, and then the stars align so that it somehow turns out just right. And so — fresh off Emmy and Golden Globe wins for Best Series — creator Amy Sherman-Palladino knew exactly what she had to do to keep the magic alive for Season 2: Change everything.

Sitting next to her husband and creative partner Daniel Palladino in a quiet Manhattan hotel suite that felt worlds removed from the manic zeal of their work, Sherman-Palladino suggested that you might have to kill a golden goose if you want to make something more valuable out of its feathers. “The thing that interests us the most,” she said, “is taking something, blowing it up, and then seeing how people relate to each other from there.” Hence the decision to begin Season 2 by uprooting everything that made the first one so familiar and moving the show to Paris for the spirited, bittersweet, vaguely musical episode that kicks off this new run.

And yet, when it comes to a visionary TV veteran who’s finally afforded the stability she’s always deserved, the decision to mix things up might be a tough pill to swallow — if not for Sherman-Palladino, then perhaps for her long-suffering fans, who’ve spent more than a decade waiting for a Sherman-Palladino show that isn’t going anywhere.

The road from Stars Hollow to the City of Lights has been long, winding, and punctuated with more sudden cliffs than a Road Runner cartoon. After turning “Gilmore Girls” into one of the most beloved hour-longs the WB ever had, Sherman-Palladino was practically forced out before the show’s bungled final season because the network was too stingy to let her end things on her terms. Her follow-up, a pregnancy-themed Parker Posey vehicle called “The Return of Jezebel James,” was canceled by Fox after only three episodes, while “Bunheads,” a brilliant and ballet-centric dramedy that felt like a spiritual successor to “Gilmore Girls,” wasn’t granted a second season despite the general consensus that it was “by several orders of magnitude the best show ABC Family has ever aired.”

At a certain point, even Sherman-Palladino’s most dedicated fans began to suspect that her warm and buoyant shows were just too pure for this sick, sad world. And now that “The Marvelous Mrs. Maisel” is the biggest thing to happen to Amazon since the invention of books, those same fans may naturally find themselves rooting for Sherman-Palladino to savor that success and not do anything that might break the spell. At the same time, this is a show about a plucky, privileged Jewish divorcee whose burgeoning stand-up career forces her to find her voice at a time when women are expected to be silent, and that means a measure of radical change.

In fact, that’s what Sherman-Palladino loves most about it. “I think the evolution of characters as life sweeps you along has been the constant in our careers,” she said, and Season 2 of “The Marvelous Mrs. Maisel” finds Midge (Rachel Brosnahan) isn’t the only one trying to find some kind of a balance in a world that’s shifting under her feet. All the major characters are either looking for a change, or bracing for one. This, it seems, is what the show is about, and the new episodes are so vital because of how deeply they take that to heart.

The relationship between a TV show and its fans is kind of like a marriage: A covenant is agreed upon, with a mutual commitment to be there for each other until cancellation do them part, predicated upon a tacit understanding that nothing ever stays the same. Both a TV show and the people who watch it have to grow in order to survive, but it can be terrifying to watch someone (or something) you love blossom into a richer, fuller version of itself. What if that richer, fuller version doesn’t love you back? 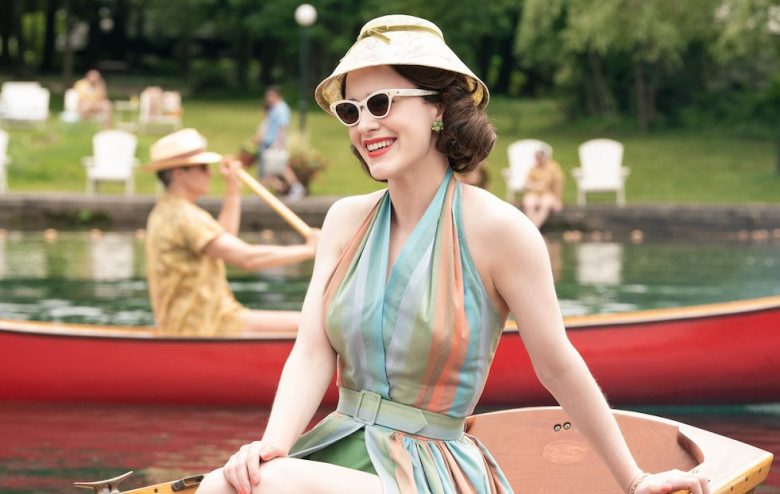 That’s the question that haunts Midge’s father (Tony Shalhoub) for much of Season 2. Abe Weissman, a Columbia professor who until recently had everything under control, begins to suffer the symptoms of an existential crisis when he realizes his wife and kids aren’t defined by their relationship to him. “That marriage is nothing like our marriage,” Palladino insisted, “but Abe is someone who’s very set in his ways and likes everything as it is. And Rose right now is the one who’s realizing ‘maybe I’m not happy — maybe I don’t even know what happiness is.’”

Shalhoub spoke with IndieWire later that same day, while his wife Brooke Adams and their friend Carol Kane listened in from a nearby couch. He said working with Sherman-Palladino and her husband reminds him of his time with the Coen brothers, when he worked on films like “Barton Fink” and “The Man Who Wasn’t There.”

Although he’s a modern man, Shaloub still appreciates what Abe is going through. “I relate to this in so many ways because Brooke and I have two daughters close to Midge’s age, and they constantly surprise and unsettle us by demonstrating that whatever we thought we were putting into those vessels… well, something completely different is coming out,” he said. “And that’s ultimately good thing.” Adams chimed in from the background: “They’re so much better than I ever was!”

Sherman-Palladino reiterated that she and her husband have always been interested in skipping rocks through still waters. “This is the thing that interests us the most,” she said. “Take something, blow it up, and then see how people relate to each other from there.”

Of course, that was the show’s inciting incident when Joel (Michael Zegen) left Midge, spurring her to pursue the dream that he didn’t have the courage to seek himself. (Zegen described his character as the show’s “realest.”) 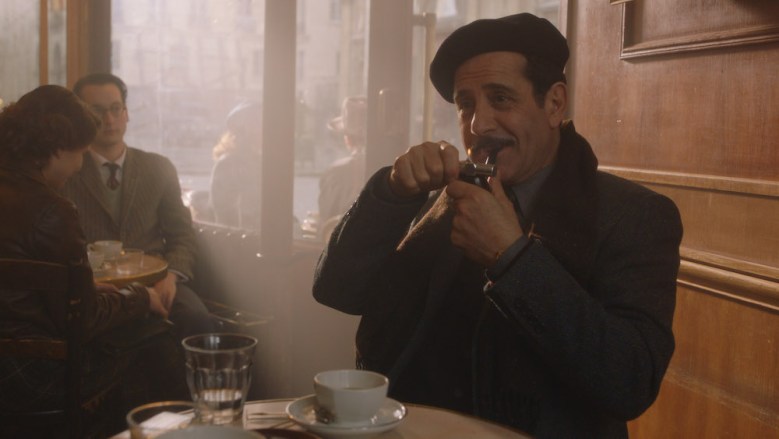 “There’s a cutthroat aspect to Midge’s ambition,” Sherman-Palladino said. “And ambition, maybe more than any other word, is something that a woman couldn’t be in the ’50s. Not even if they worked. If men thought a woman was ambitious, that was the death of everything. And yet, in Season 2, Midge is learning that she will not stop going on stage and talking about her husband, even though she loves him.” Sherman-Palladino paused. “That’s a tough thing to learn about yourself.”

Brosnahan, who speaks with her character’s flashbang intelligence, said Midge’s primary bond is now with her manager, Susie (Alex Borstein). “Alex lovingly refers to their relationship as a ‘womance,’ and I’ve held on to that — it’s exactly right. Season 2 shows that the honeymoon period is over.”

Brosnahan placed most of the blame for that on Midge, who’s so busy changing that she takes advantage of the one person who’s sticking by her side. The actress said she resented Midge’s narcissism, in large part because Brosnahan cites solidarity as the biggest difference between being a woman in 2018, and playing a woman in 1958.

“I’ve been so enveloped and lifted up by a real sisterhood, especially in the last year or so, and Midge doesn’t have that,” she said. “She doesn’t have the kind of support as a woman attempting to break barriers that I feel today walking forward in this industry and in this country. Back then, if there was room for a woman at the table, there was only room for one woman at the table. So Midge doesn’t realize how much Susie has invested in her.” 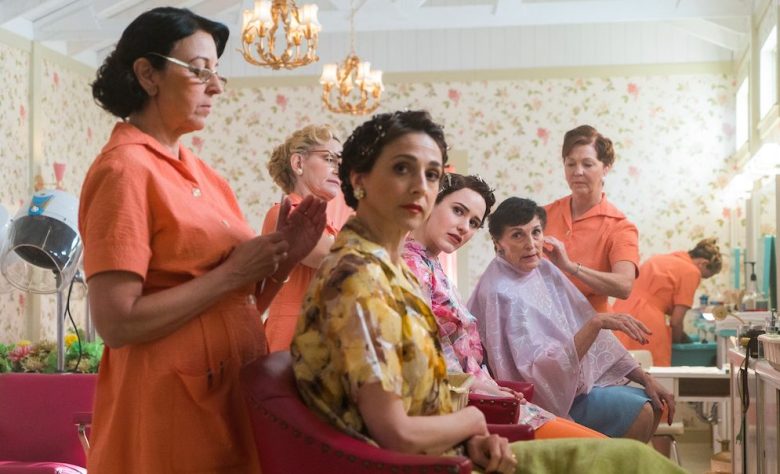 Marin Hinkle and Rachel Brosnahan in “The Marvelous Mrs. Maisel”

Brosnahan cautioned people not to frame Midge as a symbol of empowerment, even if “The Marvelous Mrs. Maisel” happened to come at a time when the world is growing more sensitive to the silencing of women. “People talk about Midge as a feminist hero, but I’ve felt very conflicted about that because I don’t actually believe that Midge is a feminist. Yet. She still has a lot of learning to do, and that can be challenging as an actor. You want her to be more ahead of her time than she is, and have her eyes open wider than they are. I believe that she can get there, and I believe that she wants to. She’s just naïve and blinded by her own privilege.”

Brosnahan’s take speaks to the cognitive dissonance of the show’s premise, a bubbly piece of escapism that invites viewers to luxuriate in the Technicolor splendor of a more oppressive time. “The show doesn’t shy away from the constricting social structures of the ’50s,” she said. “But there was also so much beauty then that we don’t have today. I mean, when they made a toaster back then, the toaster had to be beautiful. Beauty used to be the norm. If you were a woman, you weren’t gonna go outside until you were presentable. And it took you 12 hours and you couldn’t go to work simply because you couldn’t get there on time.”

While Sherman-Palladino famously had to fight the WB for the fake snow she needed for a “Gilmore Girls” Christmas episode, her show’s generous Amazon budget is practically a character in its own right. “Part of the fun of this show is showing people a New York that doesn’t really exist anymore,” she said. “We always knew it was going to be a big show, and that it couldn’t just be about people sitting in rooms talking to each other. It needs space and air and atmosphere and those things cost money. So Amazon wrote some checks. While they were crying. They were writing and crying at the same time.”

Daniel Palladino is still waiting for the gravy train to derail. “I can’t tell you how many times I’ve shown up to set and thought: ‘When are they going to stop us?’” As a recent Daily Beast article framed it, HBO has dragons, and Amazon has a family of plucky, upper-middle-class Jews. “There was one day last year where Amy and I got off the subway and there were cop cars and hundreds of extras lined up on our set and the whole street was shut down and it’s like: ‘We’re creating a world that’s pretty much gone. These are Amazon’s dragons.’”

“At this point,” Sherman-Palladino said, “I don’t think they’re going to fight us unless we want to stop the show tomorrow.” That’s right: In the year of our lord 2018, Amy Sherman-Palladino is making a show so popular that its network — or streaming platform — would be furious if she stopped. The world turned upside down. A little change, it seems, isn’t always so bad.

Season 2 of “The Marvelous Mrs. Maisel” is now streaming on Amazon Prime.