HEIDI Montag took 23 pregnancy tests in attempt to have a second baby with husband Spencer Pratt on tonight’s season 2 premiere of The Hills: New Beginnings.

The reality star purchased nearly two-dozen at-home tests as she continues her eager journey to have another child three years after welcoming son Gunner in October 2017. 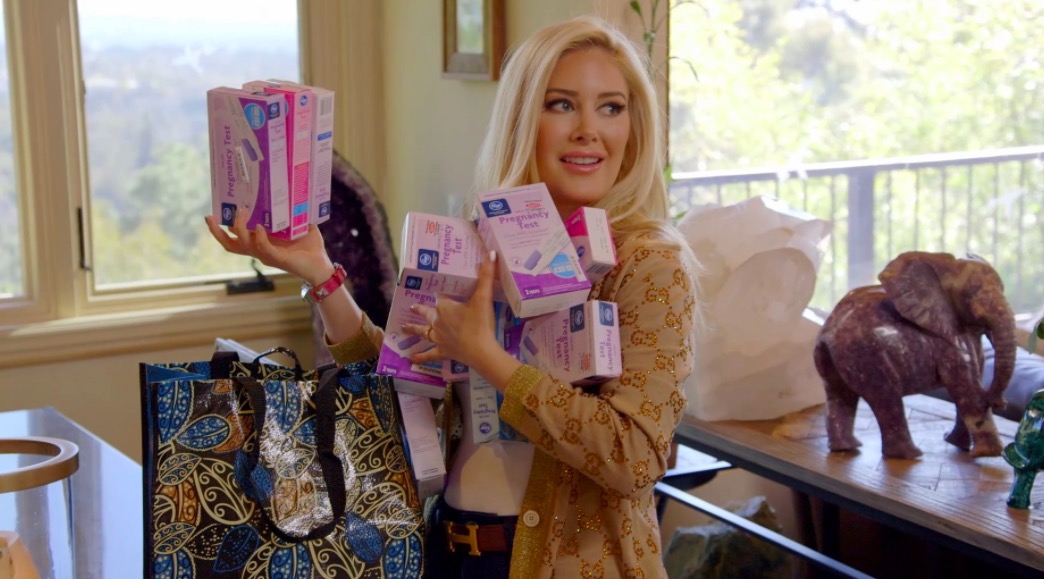 On Wednesday’s episode of the MTV reboot, Heidi, 34, shocked her husband when she walked in with a large bag FILLED with pregnancy tests.

She did not hold back the glam for the premiere – dressed in a Gucci cardigan, Hermes belt and full face of makeup.

The TV personality unpacked the many Kroger tests she picked up at a local grocery store.

A confused Spencer, 37, questioned her bulk purchase and appeared less eager to have conceive another kid.

However, Heidi remained adamant, and confessed she “only has so much time” to get pregnant again.

Fans loved the moment and were amused by the MTV darling being overly prepared.

“Does buying 23 tests make her think she’ll get pregnant faster? I don’t even care, this scene sent me,” one viewer wrote with a skull emoji.

Alongside a row of laughing emoji’s, another said: “The amount of pregnancy tests @heidimontag has.”

"How many pregnancy tests do you need Heidi? I feel like one would do it…” someone else begged the question.

While one simply put it: “That’s a lot of pregnancy tests. #TheHillsNewBeginnings”

After years of disagreeing over having a child together, the couple welcomed son Gunner Stone in October 2017 – nine years after they got married.

In recent months, Heidi has not been shy about her desire to expand her family while Spencer appeared to still be on the fence.

On her 12th wedding anniversary last month, Heidi broke down in tears as she revealed she is "trying" for another baby with Spencer.

In an emotional post on her Instagram stories, Heidi told her followers: "Oh my gosh, I realize it's Spencer and I's 12-year wedding anniversary.

"We don't count the one in November cause that's when we eloped, but this is our legal Hills wedding and I was just getting all emotional cause we've been together for 14 years…

As the tears started to flow, she continued: "Oh…! And what a blessing to have Gunner… trying for another one… healthy – so thankful."

Her heartfelt speech comes just a few days after the 34-year-old was 'bodyshamed' by her sister-in-law, Stephanie Pratt.

One fan enraged by Stephanie's comments hopped over to Heidi's Instagram feed and wrote on a post: "Stephanie just posted ur pregnant but I don't see that u posted it. Wtf I hope she's not revealing it for u."

Spencer – who has famously feuded with his sister for years – pointedly responded: "Heidi is not pregnant. Just being body shamed."