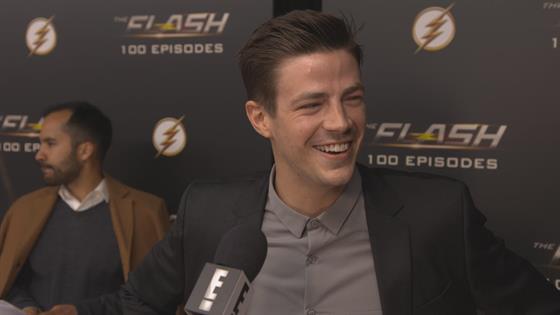 Just one week left of waiting!

Elseworlds, the Arrowverse crossover that’s already more than we ever dreamed or knew that we actually wanted, debuts this Sunday, and we’re both excited and scared. Just the pictures and brief promo glimpses of Stephen Amell and Grant Gustin in the wrong superhero suits and kissing the wrong people have made us feel weird. Actually watching it play out is probably going to blow our minds. Can Oliver Queen perfect the Tom Cruise run? Can Barry Allen brood even nearly enough for the Green Arrow? We’re about to find out!

We got our first glimpse at the chaos about to ensue at the very end of last night’s episode of Supergirl, which showed a completely destroyed Earth-90. We saw dead superheroes strewn about, including Stargirl, Firestorm, Green Arrow, Captain Cold, Arsenal, maybe Michael Jackson?, all while John Wesley Shipp‘s version of The Flash crawled along the ground to find the Monitor (LaMonica Garrett) holding a book.

“Why are you doing this?” The Flash asks.

“You did this to yourself,” the Monitor says. “And now all of you will perish.”

Everything We Know About the 2018 CW Superhero Crossover

How all of this leads to a body swap on Earth-1 has yet to be seen, but this scene is certainly not a good sign for any of the earths that may have this future coming to them.

This scene will appear at the end of this week’s Arrow and the 100th episode of The Flash as well, and then the crossover will kick off with The Flash on Sunday, December 9. Arrow will air on Monday as usual, and Supergirl will air on Tuesday to conclude the crossover event. 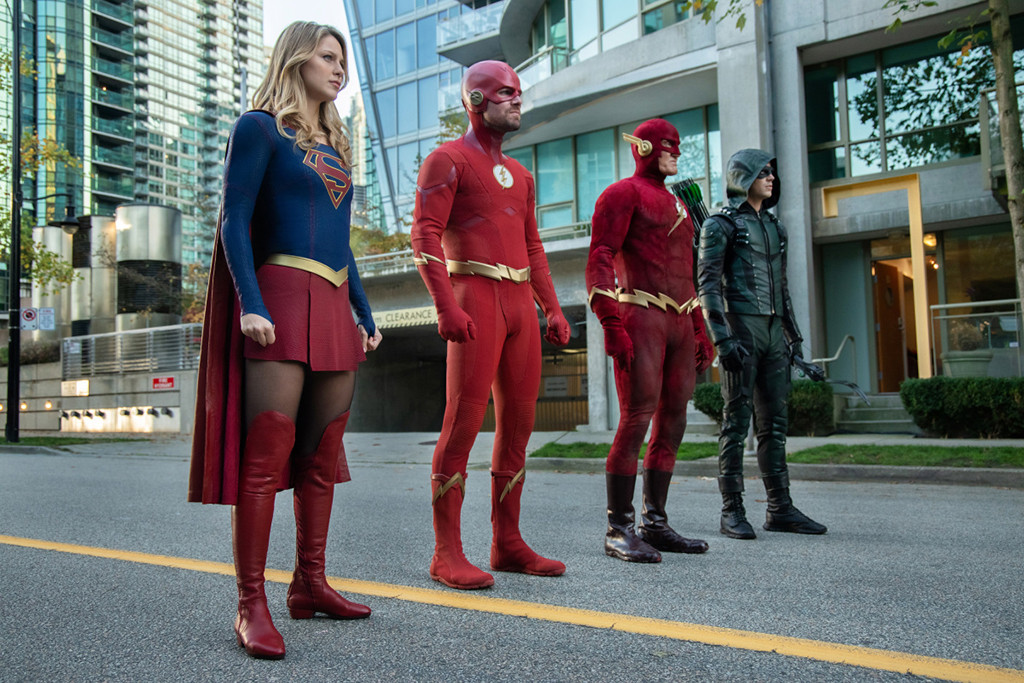 Superman/Clark Kent (Tyler Hoechlin) will return, alongside the first appearance of Lois Lane (Elizabeth Tulloch), and we’ll also see the debut of Ruby Rose as Batwoman. Jeremy Davies will play bad guy Dr. Deegan, and The Monitor will be played by LaMonica Garrett. 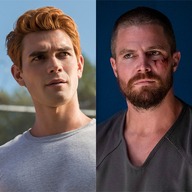 The Monitor comes to Earth-1 (and also Earth-38, the Supergirl universe) to analyze it for readiness against an incoming threat, and somehow gets involved with Dr. John Deegan, an Arkham Asylum doctor in Gotham City who rewrites reality in a way that causes Barry and Oliver to switch bodies. It also appears that Kara and Alex are no longer sisters and Alex sees Supergirl as a threat. 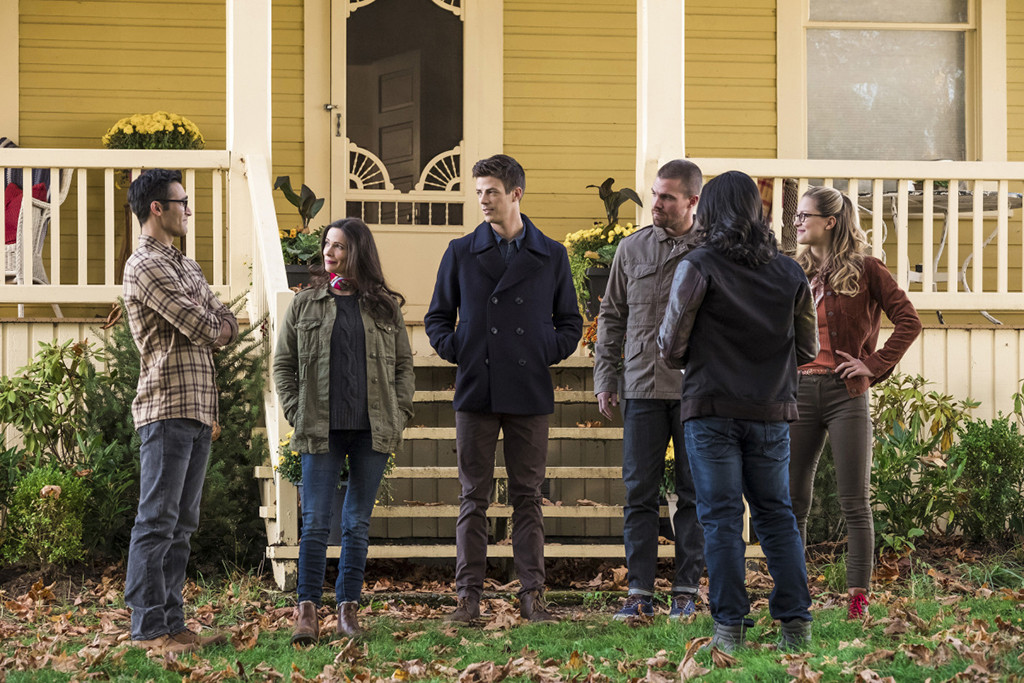 How Fun Is It Going to Be?

So. Fun. That’s all we’ve heard from everybody we’ve asked, basically. Here’s what Stephen Amell had to say when we visited the set of Arrow (it was actually the set of The Flash but that’s irrelevant):

“I wouldn’t call it the most rewarding, but it was the most fun that I’ve had maybe ever throughout the course of doing the show. Grant and I had a discussion very early on…that if this was going to work, that we really had to go for it, right? So there are elements of because he has my learned abilities, and I have his superpowers, there are elements of each other’s personality that each of us have to embrace in order to be successful at the mission that’s in front of us. So every once in a while, I’m channeling my inner Barry Allen, and I’m looking at Grant after the take going, “Is it too much?” But no, we had a blast. I think that the crossovers this year, even if we don’t have as many DC characters necessarily as we did last year, this feels like the first time or at the very least the best example of us just embracing the fun of it all and embracing all of the opportunities that we have because of all of the things that we’ve had a chance to do over the years.” 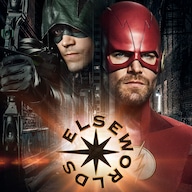 Gustin confirmed that story, telling us on the red carpet at The Flash‘s 100th episode celebration that Amell was doing his best to channel the style of The Flash.

“He was doing more things that he thought I would do,” Gustin said when we asked who was better at playing the other person. “He kept coming to be me and being like, do you think you would do this as Barry Allen?”

This, in this case, was a crazy arm movement that we can’t remember having seen Barry do, but we sure are excited to see Oliver do it.

“He’s not very animated, you know, as Oliver, and I can’t help but be animated, so even as Oliver, I’m still like, kind of animated. And he was trying to find ways to to do things like that.” 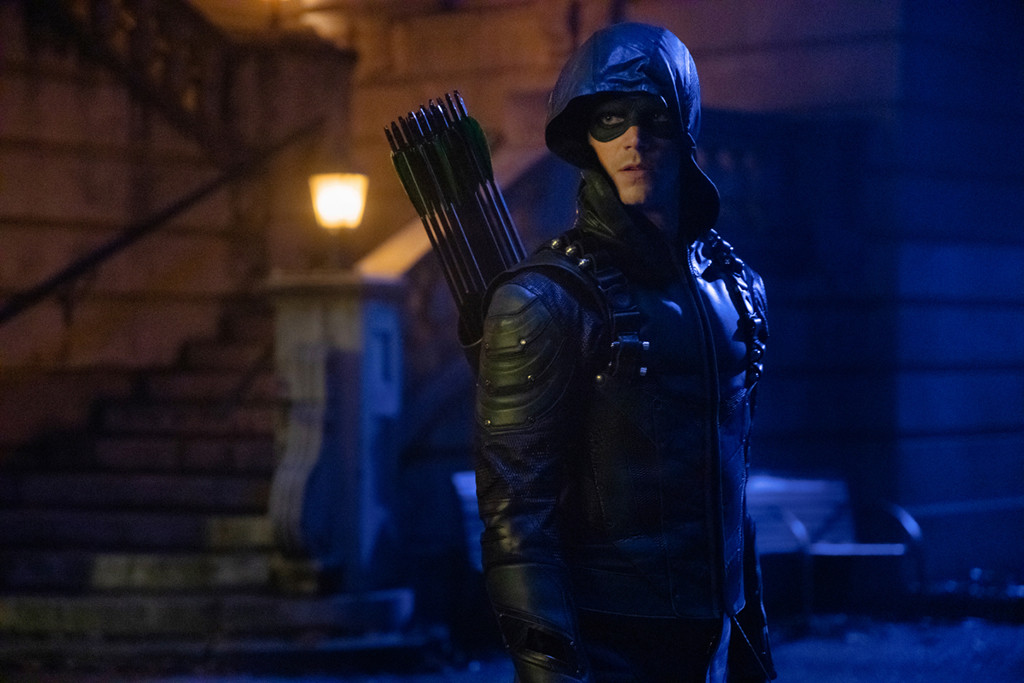 Benoist also could only talk about how much fun she had filming the three-part event.

“What I liked the most about this year’s crossover—I think more than any other crossover that we’ve done so far, aside from the musical episode which was my favorite, I had so much fun doing that one, but this one was so fun in particular because it really was the triad, so to speak, the three of us,” she said. “And Kara plays a really fun role in this dilemma that Barry and Oliver find themselves in. She’s the only one that really recognizes them for who they are in this Freaky Friday situation. And it’s really comedic. The whole thing. I think people will really get a kick out of it.” 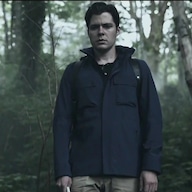 Everything We Know About the Future on Arrow

Two badass ladies are joining the Arrowverse with this crossover, though Lois Lane is a name we’ve been hearing for a while on Supergirl. According to Benoist, she’s “perfect.”

“[Kara has] known her for a while in our story, in our universe,” she said. “But playing scenes with her for the first time, the way they’ve written her is perfect. I think people and fans especially of that mythology will really love it. And Bitsie Tulloch just nailed it.”

Benoist had posted a picture of Kara, Clark Kent, and Lois Lane on the Kent farm, which just so happened to be the same Kent farm from Smallville.

“All of us were beside ourselves. To pay tribute to that show felt good. When you’re there, even though it’s in Canada, it feels like pure Americana,” she said. “It’s kind of weird. There are some really, really lovely, heartwarming scenes on the Kent farm.” 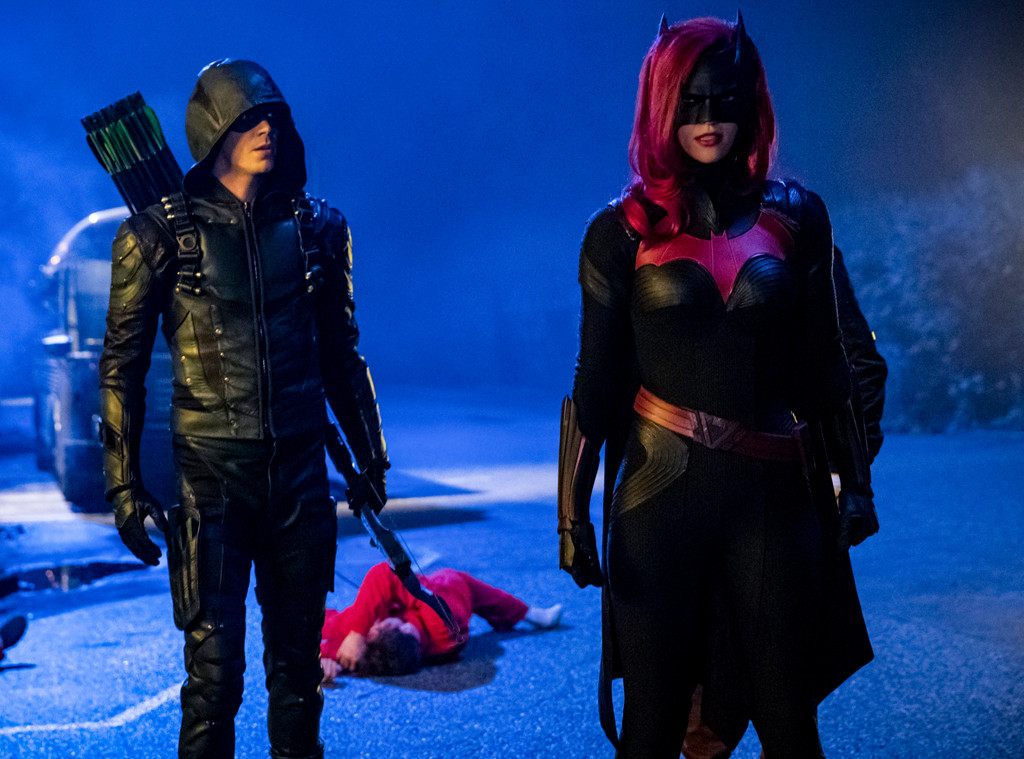 Batwoman is a bit more of a mystery here, and she’s essentially staying that way until we see her on screen, but Amell could do nothing but gush about adding the character to the mix.

“Fantastic. It was great,” he said. “The idea that we get to go to Gotham City is really exciting, and we got to do something that I’ve never done. I’ve never shot the show anywhere but Vancouver, so we go to Chicago and do all that felt amazing. Ruby’s fantastic, I think she’s going to do great. I’m all for expanding the universe, right? Every time. Always. There’s no scenario where by I go, “No, thank you.” I definitely got to shoot on sets both in Gotham City and Star City and Central City and Earth 38 and somewhere that I can’t even properly explain that I just never thought that that would have happened.”

All the Greatest Superhero Costumes on TV—Ranked From Super Tragic to Super Epic!

Many may remember last year’s crossover as a trying time for fans of the Barry & Iris and Oliver & Felicity, as Barry and Iris had a giant wedding that was interrupted by nazis, and then both couples had a whole four episodes of wedding-related ups and downs. In the end, they got married simultaneously in a small ceremony officiated by Diggle. While we don’t know much about Oliver and Felicity’s status in this crossover, we do know that Barry and Iris get a major spotlight.

“Iris is the first one to come around and be like something is wrong, so it’s really a testament to their relationship,” executive producer Todd Helbing teased. For more on that, click play on the video above!

Elseworlds begins Sunday, December 9 with The Flash at 8 p.m. on the CW.