THE CURSE OF THE WEEPING WOMAN 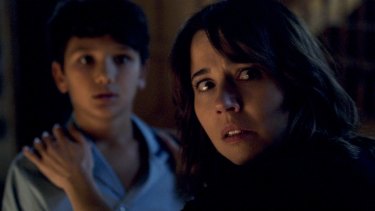 Linda Cardellini in The Curse of the Weeping Woman (2019).Credit:WARNER BROS

The horror film is sometimes said to be a naturally conservative genre. To the degree this is true, it's less about political content than about the sights and sounds that are traditionally considered scary. 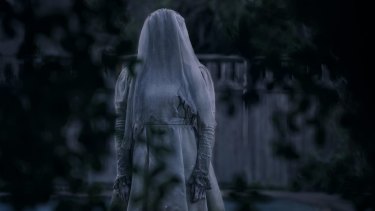 The Curse of the Weeping Woman (2019).Credit:WARNER BROS

Creaking hinges, distant rattling, sudden flashes of light: these devices have been standard for many years, and they're unleashed once more in Michael Chaves' The Curse of the Weeping Woman, where they have their intended effect roughly half the time.

Also known as The Curse of La Llorona, the film is one more variant on the theme of haunting and exorcism, and technically yet another spin-off of James Wan's The Conjuring, with Wan on board as a producer.

The setting is Los Angeles in the early 1970s. Linda Cardellini plays Anna, a widowed social worker with two young children whose job brings her into contact with Patricia (Patricia Velasquez), a single mother in a similar but more desperate plight. After a tragic turn of events, Patricia seeks vengeance by summoning up a malignant, veiled ghost named La Llorona, who preys on children in particular.

As a result, Anna comes under suspicion of being an unfit mother, forcing her to turn to the church (represented by Tony Amendola, playing the same character he did in another Wan production, Annabelle) and then to an eccentric but confident "faith healer" (Raymond Cruz).

To the degree that it's possible to take this plot seriously, it must be admitted that it has a conservative slant. For Anna, other women are menacing while men tend to be supportive and protective – and the suggestion is planted that none of her problems would have arisen if her cop husband were still alive. But these themes are so faintly delineated they hardly serve as anything more than a pretext for scares.

Intriguingly, Chaves allows a passing nod to the great Hollywood director Vincente Minnelli, a master of widescreen framing who dealt in his own way with the subject of families under threat.

Chaves is working in a more purely spectacular, even cartoonish mode. But for all his reliance on corny shock effects, he retains a degree of stylistic sophistication, grasping that these effects depend on the power of contrast between silence and noise, stillness and rapid movement, darkness and light.

The strongest passages tend to unfold without words, in the tradition of "pure cinema". One stand-out scene has Anna's daughter reaching across a threshold to retrieve a beloved doll, potentially giving La Llorona the chance to attack. This has the half-joking intensity found in the films of the Coen brothers or Sergio Leone, cranking up the tension while letting us know it's all part of a game.