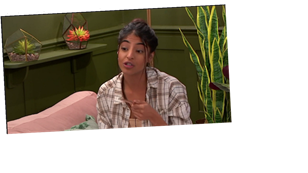 The Circle viewers were sent into meltdown as James stormed out of the room following a bitter clash with Manrika after being blocked.

The 47-year-old former Gladiator star has been playing NHS nurse Gemma from the start of the game, but was eliminated after her fate was left in the hands of Andy and Manrika.

After being giving the boot, James decided to pick Manrika as the player to visit before saying goodbye to the show for good.

James got a less than welcome reception as he walked into Manrika's apartment and she was Immediately angry on seeing him,

Manrika said she "knew" that he was a catfish from the start, but started to mellow when he explained he was genuinely trying to raise money from the NHS.

The fiery spat ended in James walking out, telling Manrika: "Grow up, you know what I mean? Nice to meet you anyway."

Viewers at home were left on the edge of their seats as the pair embarked in a war of the words.

Taking to Twitter, one fan penned: "OMG I am living for James calling out Manrika on #TheCircle. This is EVERYTHING."

Another added: "So confused about Gemma/James kicking off with Manrika when he was an actual catfish pretending to be a nurse."

A third person posted: "Omg that meet was intense, James is literally off his nut for being mad at Manrika when he lied about being a nurse for two weeks."

A fourth social media user said: "James was childish when he went to see Manrika.. simple as."

Manrika told James: "I’ve been calling you a b***h from day one.

"I said I pray whoever this is is a nurse, I’ll be devastated if they’re not. But I understand why you’ve done what you’ve done."

Explaining that she didn’t get on with Gemma from the start, Manrika was shocked to discover that Andy knew about James’s real identity but had kept it from the group.

Things then took a turn for the worst when she revealed she was the one that labelled Gemma "a snake" and "full of s**t’" in the painting game.

James told Manrika she’d "crossed a line’" and he didn’t accept her apology or explanation and told her: ‘"You could’ve owned up to it rather than being a coward, so that’s full of s**t yourself."

"You seemed genuine, but obviously you’ve pulled the wool over my eyes," he added.

Manrika stood her ground and said that she was playing a game, and that getting Gemma out was part of her game plan.

James pointed out that Manrika was not being true to herself and the pair ended on a soar note.

Later in the show, the rest of the players were left a video message from James aka Gemma.

They were left speechless and were delighted to get rid of another catfish from the show.

The Circle airs weekdays on Channel 4 at 10pm