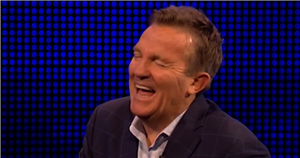 The Chase host Bradley Walsh was left in stitches after reading out a hilarious quiz answer on Friday's show.

The presenter left the room filled with giggles after he read out a rude innuendo on the evening programme.

Bradley asked the contestant: "Diana Ross had a 70s chart hit with, touch me in the what? A) morning B) heart C) Netherlands"

Fans of the show also found it hilarious and took their thoughts to Twitter to revel in the awkward antics.

One fan said: "Touch Me in the Netherlands" is probably the best phrase of the series! Rolling on the floor laughing #TheChase"

While a second added: "Netherlands was the closest they dare put to nether regions #TheChase"

To which another replied: "They could have put privates!"

A fourth wrote: "Touch Me In The Netherlands #TheChase" followed by a string of laughing emojis.

And a fifth penned: "You mean it wasn’t Touch me in the …. Netherlands ?! Surely not. #thechase"

This comes a day after The Chase viewers were quick to comment on a striking resemblance between one of Thursday night's contestants and a certain Hollywood actress.

Fans pointed out that blonde Michaela, who made it all the way to the final round, looks rather like actress Jodie Foster.

Michaela introduced herself as a 37-year-old sales assistant from Hampshire, which is a far cry from the A-list lifestyle that Jodie Foster leads.

The American actress, director, and producer was regarded as one of the best actresses of her generation and starred in films such as The Accused, Taxi Driver and Bugsy Malone.

The Chase viewers then took to Twitter to revel in the realisation with them all pointing out what the others were thinking.

One said: "Michaela is the love child of Jodie Foster and Elizabeth Moss!"

A second said: "She looks a bit like a young Jodie Foster? #thechase"

While a third added: "Stephanie looks a bit like Jodie Foster…. #TheChase" while posting a picture of the actress alongside the tweet.

And a fourth penned: "If Jodie Foster and two short planks could produce offspring… #TheChase"

The Chase airs weekdays on ITV at 5pm