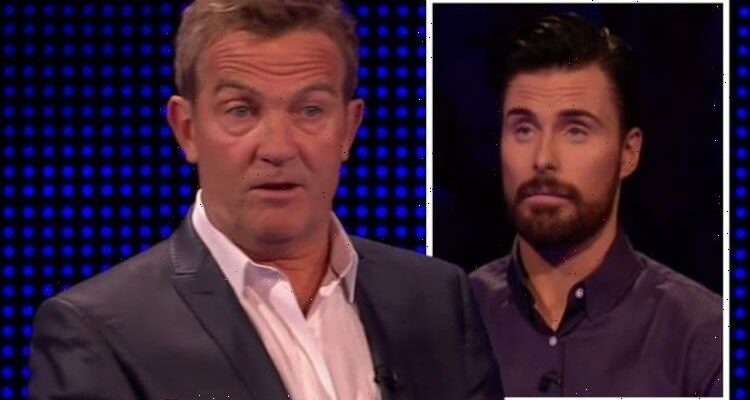 The Chase player claims he can make Shaun Wallace 'flap'

ITV has been airing a number of repeat episodes of The Chase throughout the summer, but will soon be returning with new episodes. On Monday afternoon the channel broadcast an old celebrity special of the quiz show, but fans weren’t impressed. A number of viewers took to Twitter to complain about the repeat, claiming that they were switching channels as a result.

In the classic episode, The Chase host welcomed four celebrity contestants onto the show in a bid to win a cash prize for charity.

However, as the episode began, viewers were quick to point out that it was a repeat episode and complained on Twitter.

One fan of The Chase wrote: “This is from 2017 ffs!! ITV this is why people watch Netflix and are cancelling their tv licenses??? #TheChase.”

Another fumed: “Do they have to keep showing repeats! #TheChase.”

“Seen this one at least twice #thechase,” a third viewer remarked.

A number of quiz fans made it clear they would be switching off from the popular show.

One commented: “Might have to switch over for couples come dine with me #thechase.”

Another wrote: “So another repeat then? #TheChase definitely not watching this now I’ve just seen Rylan.”

In the episode, the players fought hard throughout the episode with Mike securing £7,000 for the team’s prize fund.

Annabel wracked up £3,000 in her cash builder round and successfully brought it back to the team.

Rhea also proved her quizzing knowledge as she brought £6,000 back to the table.

Rylan was the last celebrity to face the Chaser and after earning £7,000 in his cash builder, bravely made an attempt for the higher offer.

However, he was sadly caught by the Vixen and was booted out of the competition.

The team were playing for a total of £16,000 in the final chase, but as they were one player short they unfortunately were unable to outrun the Chaser and were quickly beaten by Jenny.

The hit ITV quiz show is currently in its fourteenth season having first aired in 2009.

The Chase has been known to have a number of breaks throughout each series and season 14 is expected to continue next month.

The longest series of the show so far has been season 13 which featured a total of 210 episodes.

The Chase airs weekdays at 5pm on ITV and is expected to return with new episodes from Tuesday September 1.