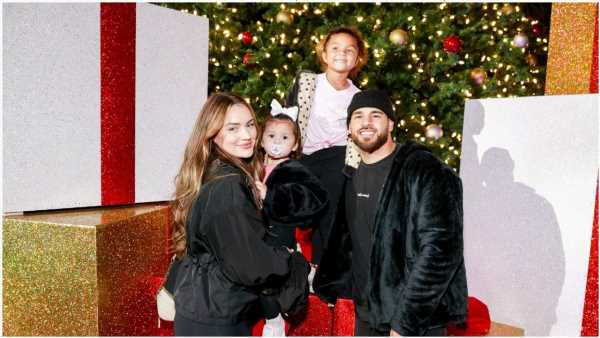 The Challenge star Cory Wharton and Ex on the Beach’s Taylor Selfridge are expecting their second child together in June 2022. She recently left a hint about the baby’s name.

The Challenge star Cory Wharton and Are You the One? alum Taylor Selfridge announced they were expecting their second child together in a March 2022 Instagram post.

Alongside a picture of the two with their daughter Mila, 2, and Cory’s daughter with Cheyenne Floyd, Ryder, 4, in which she’s holding a sonogram, Taylor, 27, revealed the couple would welcome their baby in June 2022. She then talked about her excitement for the girls to become big sisters and thanked Cory for being “the most amazing father.”

Cory, 31, uploaded the same picture announcing the newest addition to their family. He pointed out his excitement for the baby in his caption, noting his children have pushed him to become “a better man.” He also opened up in his caption, explaining he wants to give his children everything due to him growing up without a father in his household.

The Challenge star also thanked Taylor and noted his eagerness to “start this adventure with you and continue to build this family up.” The pair and Ryder recently celebrated Mila’s second birthday at Disneyland. In Taylor’s Instagram biography, she includes “mama to [Mila]” and newly added “& mgw.” She then changed it to “MW.” Therefore, it’s likely the name of baby number two also starts with an M.

Cory and Taylor met on ‘Ex on the Beach’

In 2018, Cory and Taylor hit it off during the first season of Ex on the Beach US.

Even though they had several exes visit them throughout the series – Taylor still holds the record for the most past lovers to enter the house with three – the couple made it.

However, they broke up before the show aired as Cory wanted to focus on parenting Ryder. They got back together and announced they were expecting their first child together in October 2019.

A month later, she revealed the couple were expecting twins but reportedly lost one due to “vanishing twin syndrome.” They welcomed Mila Mae in April 2020.

MTV cut ties with Taylor due to racially insensitive tweets

When Cheyenne joined the cast of Teen Mom OG in 2018 to replace Farrah Abraham, the cameras also documented Cory and Taylor as she co-parented with him.

In one scene, Taylor admitted her concerns about welcoming her first child alone due to the worldwide pandemic. The two self-shot their daughter’s birth since the MTV cameras weren’t allowed in the delivery room.

Initially, the network planned to release their footage as its own hour-long episode, Teen Mom OG At Home: Cory & Taylor’s Baby Special. However, MTV axed it at the last second to show solidarity with the Black community due to Taylor’s resurfaced racially insensitive tweets from 2012.

Therefore, the network publicly cut ties with the AYTO star. It’s reported that Cory’s ex-girlfriend Alicia Wright, who he dumped on Ex on the Beach for Taylor, had something to do with the special getting pulled as she claimed she sent the network an open letter regarding the 2012 tweets.