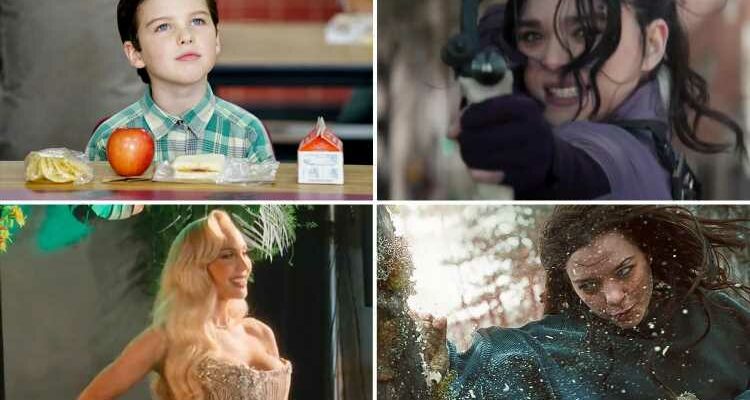 Stuck with what to watch this week? Well, then look no further. The Sun has got you covered with a list of brand new shows coming to your screens.

Whether you’re in the mood for a light-hearted Amazon Prime comedy or a fun-loving family film on Disney+, there’s no shortage of shows to binge-watch to your heart’s content.

But as series four begins, not of the luxury-pad pimps are still working at the Oppenheim Group.

Netflix aren’t keen on us revealing all the details of what to expect as they know full well that we’ll sit down to binge the lot before Wednesday’s out and be left pondering why the hell we never upped sticks to earn six-figure commissions on homes that sell themselves in LA.

Most importantly of all, though, we should find out if Davina has finally done a deal for that $75m mansion.

The Beatles: Get Back (Disney+)

In early 1969, The Beatles were at a crossroads.

Following the massive success of albums like Sgt Pepper’s Lonely Hearts Club Band and The Beatles, there were simmering tensions between Paul McCartney, John Lennon, George Harrison and Ringo Starr, who couldn’t decide on what they should do next.

Eventually, the band agreed on rehearsing new songs to be performed and recorded during a live concert – and for cameras to capture the entire creative process.

Lord Of The Rings director Peter Jackson has sifted through hundreds of hours of material – much of it previously unseen – and lovingly restored it for a truly wonderful three-episode documentary that transports you back in time.

Available to watch from Thursday and continues Friday and Saturday.

Hot on the heels of the huge success of Wandavision and Loki, the latest TV spin-off from the Marvel Cinematic Universe concentrates on the adventures of Clint ‘Hawkeye’ Barton.

We catch up with Clint right after the events of Avengers: Endgame – Christmas is coming and he’s promised his family he’ll be home to celebrate with them.

But when a dangerous foe from his past suddenly appears on the scene, Clint realises he might be a little delayed.

Help is at hand, however, in the form of Kate, a talented young archer who dreams of one day being a superhero.

Is it too soon to start getting festive? Of course not.

This wonderful new animation tells the story of Robin, a young bird who’s been raised by a family of mice, ever since her egg rolled near their rubbish-dump home.

The mice treat her like one of their own, but the trouble is, Robin isn’t nearly as talented as the rest of the clan at stealing food, which is what they love doing.

If you’ve never watched this action-packed show before, here’s a quick catch up.

Hanna follows the adventures of a no-nonsense teenage girl whose DNA was enhanced as a baby, as part of UTRAX, a secret and sinister CIA program to create butt-kicking super soldiers.

As season three begins, Hanna is attempting to destroy UTRAX from the inside, aided by her former arch-enemy, ex-CIA operative Marissa.

But with new and old enemies circling, it’s going to take all her strength and cunning to triumph.

With the motoring industry setting off along the road towards a petrol-free future, Fifth Gear has decided to ditch fossil fuels completely and become the world’s first electric car magazine show.

As well as the usual team tests and shootouts, there will be lots of advice on everything from installing home chargers to buying second-hand electric cars.

Available to watch from Thursday.

Sheldon from The Big Bang Theory has to be one of the most annoying but brilliant sitcom characters ever created.

We find out what made him that way in this fun prequel – the first three seasons of which have just landed on Netflix – and which travels back to the 1980s to meet nine-year-old child prodigy, Sheldon, as he navigates school, friendships and family.

Is it possible to have a competitive travel show? Well, look no further than Hometown Showdown, in which two best-mate celebrities go head to head in a battle to prove that the place where they come from rules.

Using their hometown’s history and culture as weapons against each other, the celebs set off on a frenetic adventure, celebrating some of Britain’s unsung destinations.

What We Do In The Shadows (BBC iPlayer)

The entire third series of the gloriously silly mockumentary about four house-sharing vampires muddling their way through the modern world has landed on the iPlayer, and it’s as wonderful as ever.

Having discovered that Guillermo is an expert vampire killer, Nandor, Laszlo, Nadja and Colin Robinson (Mark Proksch) must decide what to do with him.

They also have the added responsibility of being promoted to the Vampiric Council. Inevitably, plenty of ridiculous, uproarious adventures ensues for the loveable bloodsuckers.

If you enjoyed the exhilarating action horror movie Army Of The Dead, you shouldn’t miss this equally adrenaline-fuelled prequel.

The story centres around gifted safe cracker Dieter, who’s recruited by a mysterious woman to be part of a team assembled to pull off the daring robbery of Europe’s three most complicated, seemingly unbreakable safes.

They soon decide to turn their love for all things horror into a business, providing spooky situations for anyone willing to pay.

From creepy birthday parties to fake exorcisms, realistic alien visitors to haunted houses, Los Espookys can do it all – if the price is right.