Going into Survivor: Winners at War Episode 11, “This Is Extortion,” many fans are guessing that Tony Vlachos finds an idol or gets an advantage. However, others believe that something less obvious happens in tonight’s episode. Let’s take a look at the fan theories for episode 11. 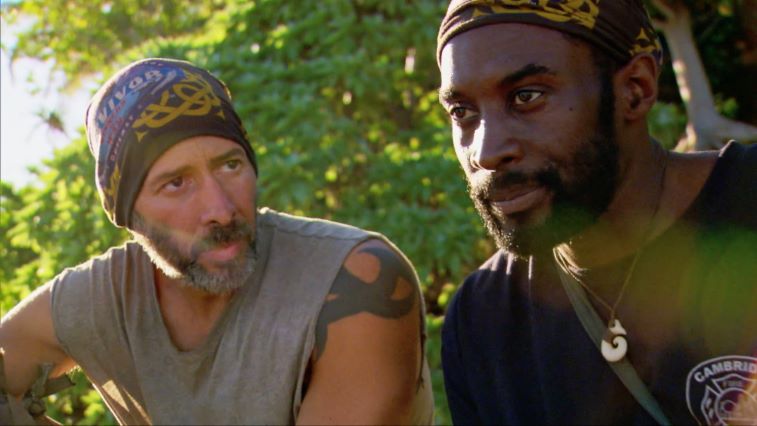 The most obvious fan theories for ‘Survivor: Winners at War’ Episode 11

“One castaway plays double agent and goes undercover to infiltrate a group they want to vote out,” reads the caption for tonight’s episode. “Also, one player who has been playing it cool finally goes to work to search for an idol.”

Many Fans believe that both the double agent and the player who is playing it cool is Tony.

“Tony finds an idol without a clue and plays it for Jeremy [Collins] in tribal and one of the girls will get voted out,” wrote one Reddit user.

Since the preview for episode 11 centers around Tony, and he is running around with his bag, fans believe he finds a hidden immunity idol. Many believe that this discovery will help him vote off Sophie Clarke, Kim Spradlin-Wolfe, Michele Fitgerald, or Sarah Lacina.

“Tony finds an idol,” added another fan. “Kim wins immunity, and Tony plays his idol for Jeremy, and the three of them send home Sophie or Sarah.”

The double agent part of the preview could be that Tony tells both alliances different things. He ends up voting out his fellow “Cops-R-Us” player — Sarah.

“I think that Kim, Jeremy, and Denise will work themselves into a solid position by throwing Tony under the bus,” one avid fan wrote on Reddit. “People will truly begin to realize that it’s INSANE that Tony has yet to be targeted and based on the episode trailer Tony will also start getting paranoid and throw himself under the bus. I hate it, but I think it’s Tony’s time to go.”

Several other fans agree that Tony might be going home. He could play his immunity idol for Jeremy and then end up voted out.

“Tony Vlachos and Sarah Lacina turn against each other,” added another fan.

Several other fans elaborate on Tony and Sarah’s alliance breaking up on this week’s episode.

“I think last week’s pre tribal scene with the two of them, this week’s preview and the fashion show sneak peek could mean that Cops R Us will be pointing their guns at each other soon,” wrote one viewer.

A ‘Survivor’ auction will occur with fire tokens as the currency

“Denise, Nick, and Tony have the most fire tokens and will have the most power,” one fan theorizes what might happen in a Survivor auction. “Tony will receive an advantage from the edge after winning the chance in the auction. It’s the first time that Tony gets an advantage, so Tony goes rogue. Tony will eventually be voted out by straying from his initial strategy of not playing like ‘Tony.’”

Whether or not there is an actual Survivor auction this week, fans are leaning toward either a Tony or Sarah blindside this week. The Cops-R-Us alliance is broken up as they turn against each other.

“Michele is the one going ‘undercover’ to try to find cracks and will end up discovering a crack between Tony and Sarah,” added another fan.

Find out tonight at 8 p.m. EST on CBS, which winner is sent to the Edge of Extinction next on Survivor: Winners at War.