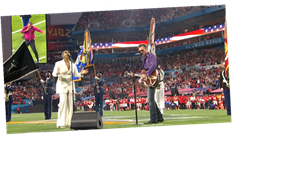 Super Bowl fans were blown away by Jazmine Sullivan's performance as she belted out the national anthem ahead of the big game on Sunday night alongside musician Eric Church.

The R&B singer and country music star Eric belted out the Star-Spangled Banner anthem as viewers prepared to watch Kansas City Chiefs take on the Tampa Bay Buccaneers on the field.

Eric, 43, kicked off the performance and was later joined by Jasmine, 33, and the pair brought down Raymond James Stadium with their stunning rendition.

Sports fans rushed to their keyboard to discuss the duo's version of the anthem – and viewers in particular were impressed with Jasmine.

Taking to Twitter, one fan gushed: "Jaszine Sullivan. The voice of our nation."

A fourth social media user wrote: "Jazmine delivered like we all knew she would."

"Yes God. Jazmine did what needed to be done. I expected nothing less," said a fifth person.

The national anthem was performed with COVID-19 protocols in mind. The performers were not right next to each other for the anthem and were on their on small stage.

She accessorised her look with a glitzy head peace which went down well with fans.

One fan tweeted: "The national anthem was awesome I think Jazmine's head piece was a nod to Whitney."

Speaking ahead of their performance, Jazmine told Associated Press: "We come from two very different backgrounds, (but) I find beauty in blending different lifestyles and different music (and) different art and making something special.

"I definitely think that’s what we accomplished and I think it’ll be really good."

Female artist H.E.R. also performed a rendition of America the Beautiful ahead of the game.

Warren "Wawa" Snipe, a deaf rapper and recording artist, performed the national anthem in American Sign Language on behalf of the National Association of the Deaf.

Canadian pop sensation The Weeknd, real name Abel Tesfaye, will take to the stage in front of more than 100 million television viewers.