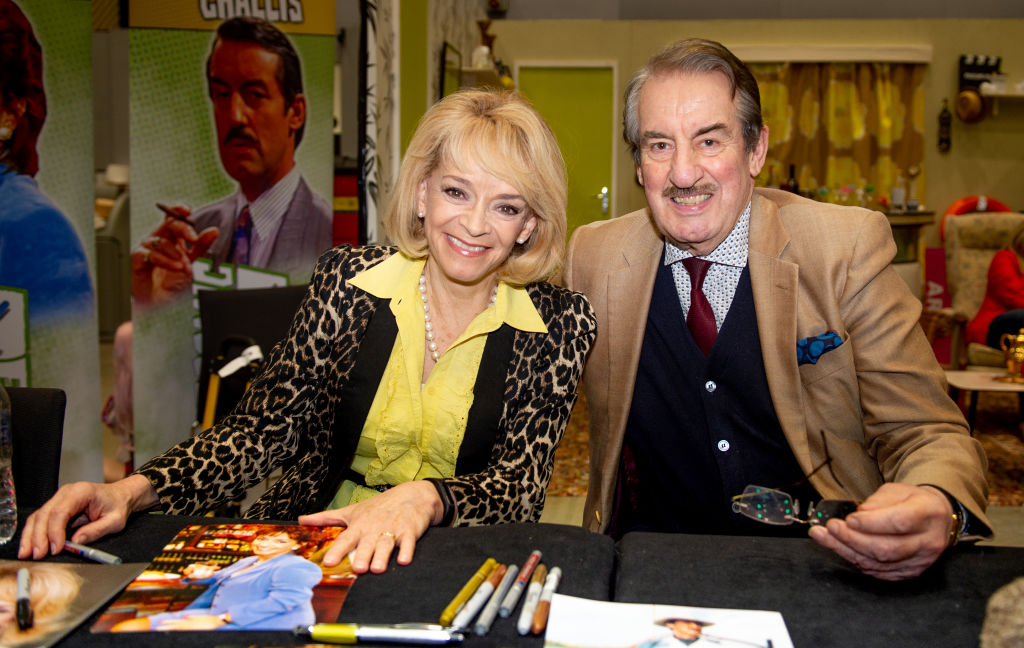 Only Fools and Horses stars Sir David Jason and Sue Holderness have led the tributes to their former co-star John Challis following his death aged 79.

On Sunday, it was announced that John, best-known for playing Terrance Aubrey ‘Boycie’ Boyce on the BBC sitcom, had died after suffering from cancer.

In a statement from his family, it said: ‘It is with heavy hearts that we bring you such sad news.

‘Our dear friend and yours, John Challis, has died peacefully in his sleep, after a long battle with cancer.’

Tributes immediately came pouring in for the late actor, including from Holderness, who played Boycie’s wife Marlene in Only Fools And Horses.

In a statement, she said: ‘Marlene without Boycie – it’s unthinkable. John Challis was my partner on screen and stage for 36 years and my beloved friend. R.I.P. darling John. I will miss you every day.’

Sir David, who played Derek ‘Del Boy’ Trotter in Only Fools and Horses, said in a statement: ‘It is with much sadness to hear that John Challis, a dear friend, has passed away. He was a wonderful actor, a Gentleman in the true sense of the word and I know he will be missed by so many.

‘We had known each other for well over 40 years when he appeared in the second episode of Only Fools and Horses as Boycie. A character so well loved by the many fans of that show so I am pleased that he witnessed the outpouring of admiration recently shown for the 40th Anniversary of the first episode in 1981. I send my love and condolences to his wife, Carol.’

Former member of The Three Degrees Sheila Ferguson tweeted a picture of herself with her friend Challis.

‘I’ve been waiting for this for a few days now. It is with great sadness that I tell you that my dear friend, John Challis (Boycie from OFAH) has just passed. I’ve been in touch with his wife, Carol, who is obviously heartbroken, as am I. Much love, Sxx,’ she wrote.

‘Shocked and saddened to hear of the passing of Wonderful John Challis such a fabulous man. Loved by the Nation. Condolences to his family and loved ones,’ wrote ‘Allo! ‘Allo! star Vicki Michelle.

Actor Crissy Rock, who appeared in Benidorm with John Challis, was among those paying tribute to the actor.

She said on Twitter: ‘I am heartbroken to hear the news that the legendary actor @BeingBoycie has sadly passed away. John you were a true gentleman and always so loving and supportive towards me. I am thinking of your family and close friends at this hard time. Rest well. Crissy xx.’

‘He was a truly lovely, decent & honourable man, and a great supporter of the RAF & @Memorial_theFew in particular (here with the late, great Geoff Wellum DFC). Sending love to Carol & his family. RIP John.’