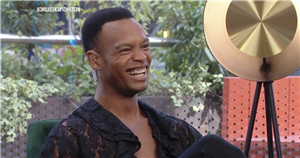 Strictly Come Dancing's Johannes Radebe revealed on today's Steph's Packed Lunch that he once suffered an awkward wardrobe malfunction while dancing on telly.

The professional dancer explained that his trousers once ripped open as he was dancing while on television.

To make matter worse, the star explained he was only wearing a jockstrap when the incident happened.

"I was wearing a dance belt, so that did not help," he said.

Johannes went on: "I was on telly and there's no covering it is there? I will forever have that on my mind, like it's crazy"

Steph chimed in to ask: "Did it impact the rest of your dancing?"

Johannes replied: "Oh absolutely. I refused to turn around at one point and just kept everything to the front."

Steph asked: "Did anything change after that, like do you wear sturdier bottoms?"

"I wear solid black pants, I will never let something like that happen again!" he answered.

Johannes' Strictly partner was revealed to be John Whaite on Saturday's launch show.

Finding out who his professional partner would be, John entered to find someone hiding inside a life-size cake, from which Johannes then sprang.

"When I saw a big sparkly cake I knew that it had to be Johannes!' admitted John, before gushing about taking part in Strictly, asserting: 'It's a massive honour this!"

He told Johannes that he would put in the work needed, and told his new dance partner: "I want to have hips like Shakira by the time we've finished."

John admitted in his confessional "I've made it now'" as he about how excited he was to secure a place on Strictly.

Explaining his passion for being glammed up, he admitted: "I once went into school with fake tan and was given a scourer to take it off."

Get the latest updates on all the things TV and showbiz by signing up to the Daily Star showbiz newsletter .