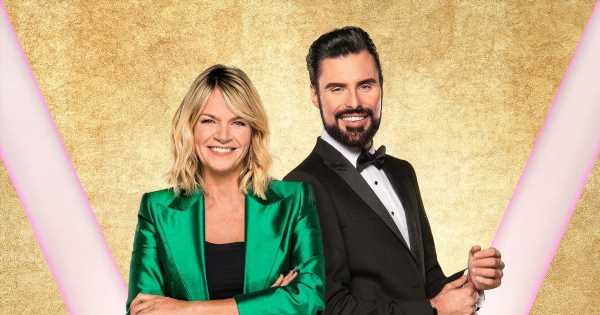 The BBC Two series has been presented by various hosts since its debut in 2004 such as Zoe Ball, Rylan, Claudia Winkleman and more recently dancer Janette Manrara has joined the presenting team.

From wardrobe malfunctions to F-bombs to even a ruffling of feathers, the BBC2 show has delivered in giving Strictly fans an extra added bonus when it comes to providing entertainment.

As the current series almost draws to a close, Daily Star has whittled down some of the most explosive moments from IT Takes Two.

In a jovial game, dancing duo Giovanni and Rose Ayling-Ellis had been quizzed by host Rylan to see how well the couple knew each other.

The pair received full marks, surviving the friend's test proving their genuine friendship to one another.

However, viewers were quick to show off their supersonic hearing when they apparently heard Giovanni drop the F-bomb when Rylan revealed that they wouldn't be able to take the trophy home.

Many fans were left baffled and quickly pointed out how no one in the studio seemed to notice.

Host Rylan issued a stern warning during an episode of the current It Takes Two series after jumping to the defence of former series contest Tilly Ramsey amid the Steve Allen' body-shaming row.

In the episode, Rylan says: "If you come for her, you come for us." with the support of presenter Jaimie Laing who later added, "Can we also remember she's 19?"

In 2019, rumours spun that Rylan was said to have fallen out with his former co-host Zoe Ball after they clashed during rehearsals for an episode of It Takes Two.

The reported 'feud' broke out after Zoe jokingly told Rylan to "shut up" when he disrupted her during rehearsals on Friday.

Rylan was adamant that the rumoured argument never even happened because he wasn't even at rehearsals that day.

In 2019, host Zoe was in the middle of interviewing former footballer Alex Jones and her dance partner, Neil Jones, when the sound almost completely cut out.

The conversation ended up being a very muffled chat between the trio.

Zoe's microphone was utterly drowned out and said, "I think we're having sound problems at the moment".

Ever the professional, the TV personality tried to carry on until the sound was muted entirely forcing her to surrender the interview all together.