With readers turning to their home viewing options more than ever, this daily feature provides one new movie each day worth checking out on a major streaming platform.

When Steven Lisberger first conceived of what would become his 1982 film “Tron,” the fledgling filmmaker had a startling vision of the future: an animated feature that could explore the world of early video games like “Pong” in the kind of detail not yet available for live-action moviemaking. With producing partner Donald Kushner — with whom he’d made the 90-minute Olympics-themed animated feature “Animalympics” — Lisberger set up an animation shop to bring “Tron” to fruition. However, they eventually decided to explore the story through a blend of live-action footage and computer animated sequences.

It wasn’t exactly an appealing idea to the studio system, because Lisberger and Kushner weren’t just angling to create a new cinematic world from scratch; they also wanted to develop new technology to make it so. It was a big ask, but suited Disney’s agenda of exploring the potential for computer generated effects, so “Tron” found the deep-pocketed home it needed.

With a cast that included Jeff Bridges, Bruce Boxleitner, and Cindy Morgan, “Tron” arrived in the summer of 1982, an absolutely bonkers season at the box office that included the release of such hits as “E.T.,” “Raiders of the Lost Ark,” “Poltergeist,” and “Star Trek II: The Wrath of Khan.” The film’s use of computer animation leads to a radical new storytelling perspective — it mostly takes place inside a mainframe computer, with various characters also appearing as anthropomorphized programs that interact with each other and their world (while also existing as entirely made-up digital avatars). For an audience not yet accustomed to the idea of computer-based interactivity, the movie’s narrative framework helped to normalize emerging technology just as home computers started making their way across the country.

“Tron”wasn’t a massive hit, but did pick up two Oscar nominations and eventually grew into a cult classic; its technological vision plays a big part in its lasting appeal — at least more than some of the confusing storytelling decisions. (The film’s amusing Wikipedia page puts it best, noting that “the storyline was criticized at the time for being incoherent.”) “Tron” was celebrated for taking risks with boundary-pushing technology, which inevitably meant that a sequel would come along as soon as the studio wanted to try that again.

But that guiding principle did not carry over to “Tron: Legacy,” which hit theaters in December of 2010 and — despite making a tidy $400 million at the box office — has not aged well over the past decade, even as its predecessor holds strong. Director Joseph Kosinski’s sequel arrived during an aggressive time for Hollywood blockbusters, in the midst of the industry’s obsession with squeezing any film with widespread name recognition into a franchise box (even entire decades after their original versions were made). 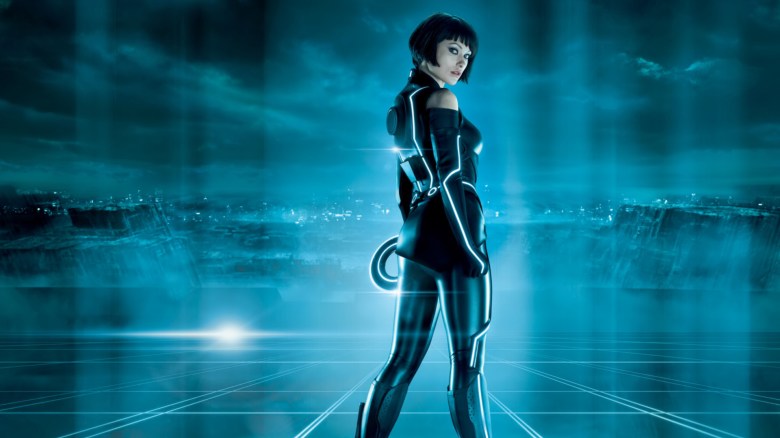 “Tron: Legacy,” which starred a now-grizzled Bridges alongside Garrett Hedlund and Olivia Wilde, hit theaters the same year as such uneven franchise wannabes as “The Karate Kid,” “Sherlock Holmes,” “Alice in Wonderland,” “Robin Hood,” “The A-Team,” and “Wall Street: Money Never Sleeps.” Some of them succeeded, though even smash hit “Alice in Wonderland” (as inspired by the classic Lewis Carroll novel and itself an example of Disney betting big on a non-animated story with big technical swings) fizzled when Disney attempted to take the next step with the franchise, while others (like “Robin Hood” and the misbegotten “Wall Street” sequel) fizzled; none of them scored particularly well with critics.

Despite its sizable box office take, “Tron: Legacy” withers in the shadow of predecessor, as its very existence seems like a rebuff to the very material that first inspired it. Some of the film’s technical missteps — like tapping Bridges to play both a returning Kevin Flynn and also a de-aged version of himself (as a nefarious program) that was CGI-ed so extensively that the character looks as if he’s been power-washed into a state of being that’s neither human nor digital — would be shaky in any film, but they registered as a particularly ill-conceived in one inspired by such a gamechanger.

Despite bringing back original characters (though Boxleitner’s in-computer appearance is about as cheap and silly as it gets, and he’s the titular character) and attempting to play up the heady weirdness of being inside a computer, it’s hard to shake the sense it’s all been done before. That’s because it has, with the kind of out-there ambition few sequels can ever able to truly harness. “Tron” realized the dream of virtual filmmaking while paving the way for the future, which means its legacy is a lot more secure than its poorly-named sequel.

“Tron” and “Tron Legacy” are now streaming on Disney+.