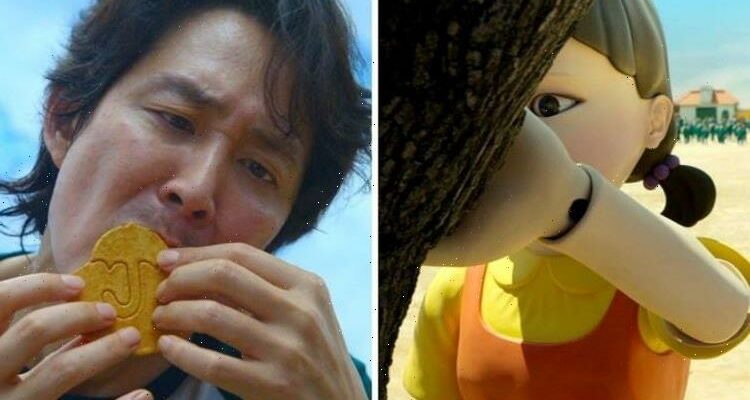 The sensational new South Korean drama forces hundreds of people to compete in a chilling series of children’s games. With their lives constantly at stake, the second game challenges the players to extract a small shape from a piece of honeycomb. Creator of the Netflix series Hwang Dong-hyuk revealed he included his own methods in the third episode of Squid Game.

Writer and director Dong-hyuk has revealed he used the same strategy as Seong Gi-hun (played by Lee Jung-jae) to beat the dalgona game.

After realising life is just as cruel on the outside world, Gi-Hun and hundreds of other contestants decide to return to the games for a chance of winning the cash prize.

Unfortunately, they have another sinister surprise waiting for them in the next game and plenty more players are eliminated by the masked staff.

In episode three, The Man with the Umbrella, Gi-hun and the rest of the group compete in a traditional Korean game called dalgona.

On why he included this particular activity, Dong-hyuk explained: “The Honeycomb (dalgona) game was what I enjoyed as a child.”

He also revealed: “I thought my secrets to winning were interesting enough to be included in the work.”

Thankfully, the games’ threatening Front Man (Lee Byung-hun) and his staff are fairly lenient on cheating, and Gi-hun is able to walk free.

Each player is given a piece of dalgona, or honeycomb, and challenged to extract an engraved shape with a needle to win the second game.

With time rapidly running out, Gi-hun realises licking the back of the dalgona and holding it up to the warm light melts the honeycomb and allows him to remove the shape faster.

It turns out his method was a simple yet cunning way for Korean children to beat their friends at the sticky competition.

The creator also spoke to Netflix Korea about including his sneaky tactics in the dalgona episode.

Some viewers may have felt the secret method was simply a way of ensuring Gi-hun’s survival, but Dong-hyuk assured them it really does work.

“It’s a trick I used when I was young,” he confirmed. “It’s how I won the grand prizes which was not good news for the dalgona guy.”

Just to be sure, he also got hold of some dalgona to test his trick the night before filming the episode.

Dong-hyuk continued: “I wanted to test and see if it really worked.

“I brought some to my hotel room the day before and licked it alone all night long.”

This wasn’t the only hidden trick to beat the Squid Game tournament included within the series.

Gi-hun and his team narrowly avoided plunging to their deaths thanks to Oh Il-nam’s (O Yeong-su) tug-of-war tactics.

Plus, another remaining player ensures Gi-hun, Sang-woo (Park Hae-soo) and Sae-byeok’s (Jung Ho-yeon) survival on the glass bridge thanks to his experience as a glass factory worker.

Squid Game is available to stream on Netflix.