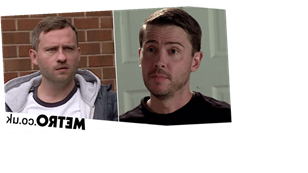 Todd Grimshaw (Gareth Pierce) is going to be like the cat that got the cream when he finally manages to get his hands on what he wants in Coronation Street – his ex Billy Mayhew (Daniel Brocklebank).

He has already utilised some of his more cruel and vindictive methods to drive a wedge between Paul and Billy and , in coming months, he will manage to see his plotting pay off.

But he won’t be smug for long as viewers can look forward to the tables turning, leaving Todd fuming and distraught.

Show boss Iain MacLeod told Metro.co.uk: ‘I love Todd, Gareth has been a real find and he has a natural chemistry with Dan Brocklebank. Todd never goes with something in a normal way – it’s bags of skullduggery, he kind of enjoys his torturing, he is very selfish when he wants something and that prize in this case is Billy.

‘In an underhand way, he undermines Billy and Paul’s relationship – he will get what he wants but the lengths he goes to will be his undoing. In an explosive and thriller-ish way later in the year, Todd’s deceit will come to light.

‘He will lose everything again but he is Teflon he will get back up. Todd has the capacity as a villain to be funny and enjoyable.’

With that in mind, there’s a new venture planned for Todd which will be a bit more light hearted than his relationship wrecking.

Iain smiled: ‘We are giving him a job in the Undertakers with George – it’s a brilliant double act. They are opposite to each other, George is fun and warm and Todd is just not. That will provide a spoke in the wheel for George and Eileen as well, there will be funny and interesting scenes too.

‘Todd won’t just be doing bad stuff, there will be a lot of humour and the dialogue pops off the page with Todd, the writers love writing for him and that will come through.’