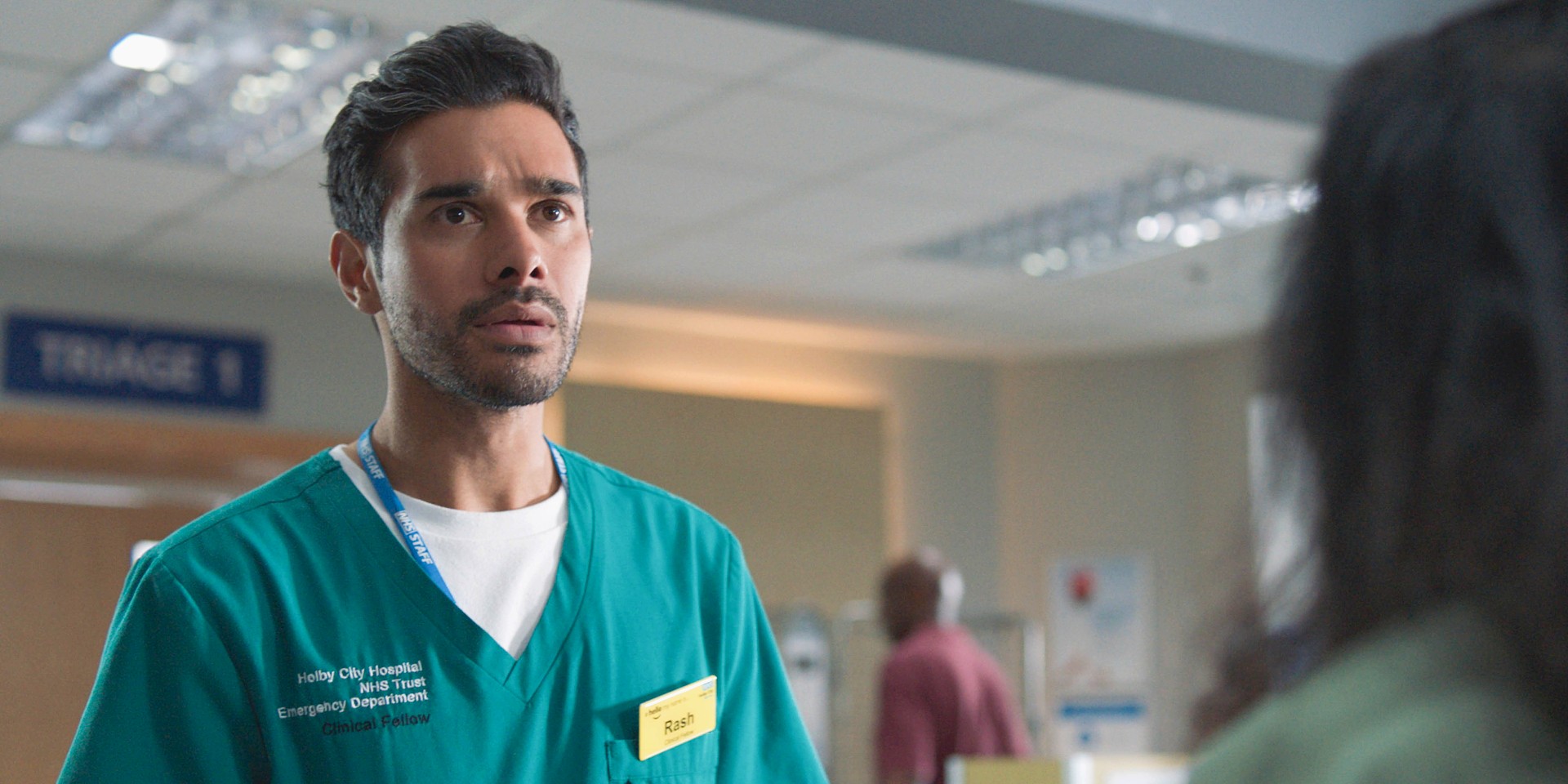 Brushing aside the doctor’s offer of information on support and private care, Rash said he didn’t need it.

His determination to take care of Ashok himself soon crumbled when he had to go to work but found himself distracted by worries over his dad. This led him to get into Dylan (William Beck)’s bad books when he missed a diagnosis that Paige (Shalisha James-Davis) was able to make.

Then his dad’s former partner Mona (Shobu Kapoor) brought Ashok into the ED after he turned up at her house, telling Rash he was going to have to get professional help for his father.

Not long after that Paige found Rash huddled under the stairs having a full blown panic attack as the pressure of his dad’s condition became too much. She calmed him down and said that she would give as much support as she could. Rash finally realised he needed to accept help from wherever he could.

This included his dad’s old friend Nadeem (Emilio Doorgasingh) – but why was Mona troubled when she stopped by with food and found Nadeem at Ashok’s house?

Meanwhile Stevie (Elinor Lawless) had an extremely challenging patient to deal with. Sam (Sam Oladeinde) thought he was ‘the son of God’ and was brought into the ED after doing something very unwise with a nail gun. David (Jason Durr) told Stevie that Sam was in so much distress he should be sedated, but she was determined to avoid that until he’d had a psych consult, which was predictably delayed.

This led to Sam – who had a history of paranoid schizophrenia – becoming even more agitated and stabbing himself in the neck with a pair of scissors. Belatedly, Stevie realised that David had been right.

This would have made the day stressful enough for Stevie but she was also dealing with her old enemy Jonty Buchanan (Richard Harrington), who was determined to destroy her career. He took a picture of her and Marcus (Adam Sina) kissing, and threatened to expose Stevie for using sex to get ahead in her career.

Stevie told Marcus to sort this situation out, and Marcus arranged to meet Jonty in a deserted back street where a fight led to Jonty being impaled on a nail.

This was obviously bad news for Jonty but it turned into good news for Stevie as she saved Jonty’s life with her expertise and told him they were quits and he should delete the photo. He told the police that the nail incident was an accident.

Marcus was pleased because at least all of Jonty’s ranting about them in the department meant that their relationship was now out in the open. ‘We can be together now,’ he told Stevie. Nope. Stevie had realised that her relationship with Marcus is hindering, rather than helping her career and she doesn’t need him in her life.

‘This thing’s done,’ she said. But is it? Marcus looked far from happy at being dumped.

Elsewhere it looks like Paul (Paul Popplewell) is getting himself into trouble again after a former acquaintance from school pitched up and made him feel all insecure about his relationship with Robyn (Amanda Henderson). This Damien (Daniel Millar) had been the school heart-throb, and also a bit of a bully by the sound of things. With his arm in a plaster cast, he told Paul he was going to need help with work – which turns out to be illegal fly-tipping.

Rash isnât the only one worried about Ashokâ¦

Paul has agreed to do a job for him because he wants the extra cash to impress Robyn. This can only end in tears, but let’s hope they’re not Robyn’s because she’s been through enough.

Someone else who’s been through a lot is Jan (Di Botcher), but there was excellent news in the episode that she’s been reinstated after being suspended when she accidentally ran someone over.

Expect to see Jan back in the familiar green uniform soon, but also expect Sah (Arin Smethurst) to be keeping a close eye on her as they seem worried that Jan’s mental health might still be a bit fragile.