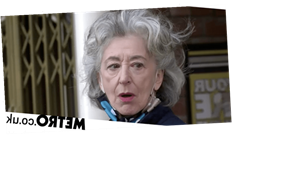 The cobbles stalwart had quite the decision on her hands in tonight’s edition of the ITV soap, after Arthur Medwin (Paul Copely) asked her to move to Canada with him.

Arthur had decided to depart Manchester in the wake of wife Beryl’s tragic death, and he asked Evelyn to consider accompanying him.

Evelyn was conflicted, as she pondered the life she could have with the man she loves.

However, in spite of the possibility that she could be happy with Arthur, she ultimately decided that she already is happy in Weatherfield — surrounded by Tyrone Dobbs (Alan Halsall), Hope and Ruby.

Therefore, she met Arthur at the tram station to inform him of her decision.

A sad goodbye ensued, as Arthur bid Evelyn adieu and headed off.

Evelyn was evidently heartbroken as she returned to the eponymous street, but she soon found herself in the company of Roy Cropper (David Neilson), and they headed off on a walk together.

Have we seen the last of Arthur? Could he return to the cobbles some day?