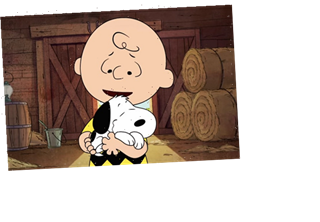 In the video, which you can view above, Charlie Brown walks into a barn to find a sad-looking, black and white pup sitting on top of a bale of hay.

“Look what I have” the boy says, holding out a treat for the little guy. Snoopy is so excited that he immediately jumps up into Chuck’s arms.

“We’re going to be best friends,” Charlie Brown says to his new dog, snuggling him close. Then he brings Snoopy home and tells him, “Don’t be nervous, you’re going to like it here.”

The rest of the trailer proves Snoopy most certainly does, going through one crazy adventure after another with Charlie Brown, Woodstock and the rest of the Peanuts gang, including Lucy, Linus, Franklin, Schroeder, Peppermint Patty and more.

Per Apple TV+, “The Snoopy Show” is an animated series for kids of all ages that stars the internationally beloved beagle and his feathered best friend Woodstock as they tackle all-new adventures. Snoopy may seem like just a happy-dancin’, bone-lovin’, doghouse-sittin’ pup, but he’s much more than that. He’s Joe Cool: hippest kid in school. He’s surfer king and famed arm wrestler Masked Marvel. He’s World War I Flying Ace who battles the Red Baron. All of his bold, beloved personas are on full display in this brand new animated comedy.

“The Snoopy Show” is meant to be “multi-generational viewing for children 4-11 years old and their caregivers,” consisting of episodes with three seven-minute cartoons based on the iconic comic series created by Charles M. Schulz.

Made through Apple’s partnership with WildBrain and Peanuts Worldwide, “The Snoopy Show” premieres Feb. 5 on Apple TV+, joining the streaming service’s other original Peanuts content, as well as its catalogue of classic holiday specials.