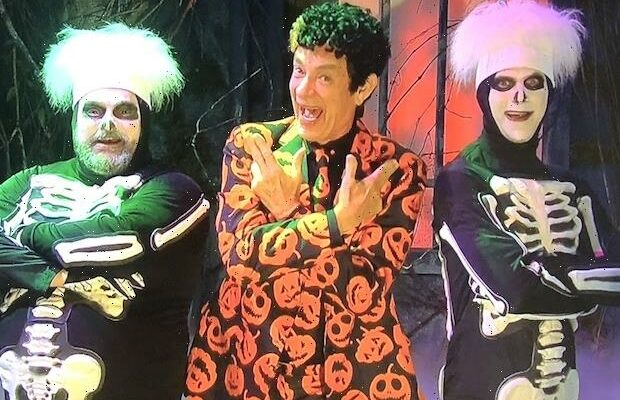 Somehow we did not see this coming, the instant Tom Hanks popped up in an earlier segment of Saturday Night Live‘s Halloween episode. But what a treat it was.

After making a surprise appearance this Saturday night in an sketch about an AA group that gets a bit fixated on making a Pixar movie about suitcases, and then intro-ing musical guest Jack Harlow, Hanks put in another encore, as a group of amusement park guests braved a scary “Cellblock 666” ride.

There, as the ride’s doors opened and closed, the visitors were spooked by the classic-horror likes of Michael Myers! Annabelle! Pennywise! And… David S. Pumpkins, again played by Hanks and again accompanied by backup dancers Bobby Moynihan (who had popped up earlier during Weekend Update as Drunk Uncle) and Mikey Day.

Hanks first originated the character of David S. Pumpkins almost exactly six years ago, in an episode that featured Lady Gaga as musical guest. (I remember it well, because I was in the audience for that one!)

Pumpkins’ participation in the fright ride once again stupefied the guests, appearing as he did alongside actually iconic horror movie characters. And attempts to gain insight into his relevance were, as always, futile. Though apparently he’s from Ibiza?

What did you think of finally getting another Halloweentime visit from David S. Pumpkins? (Video will be added once it becomes available.)