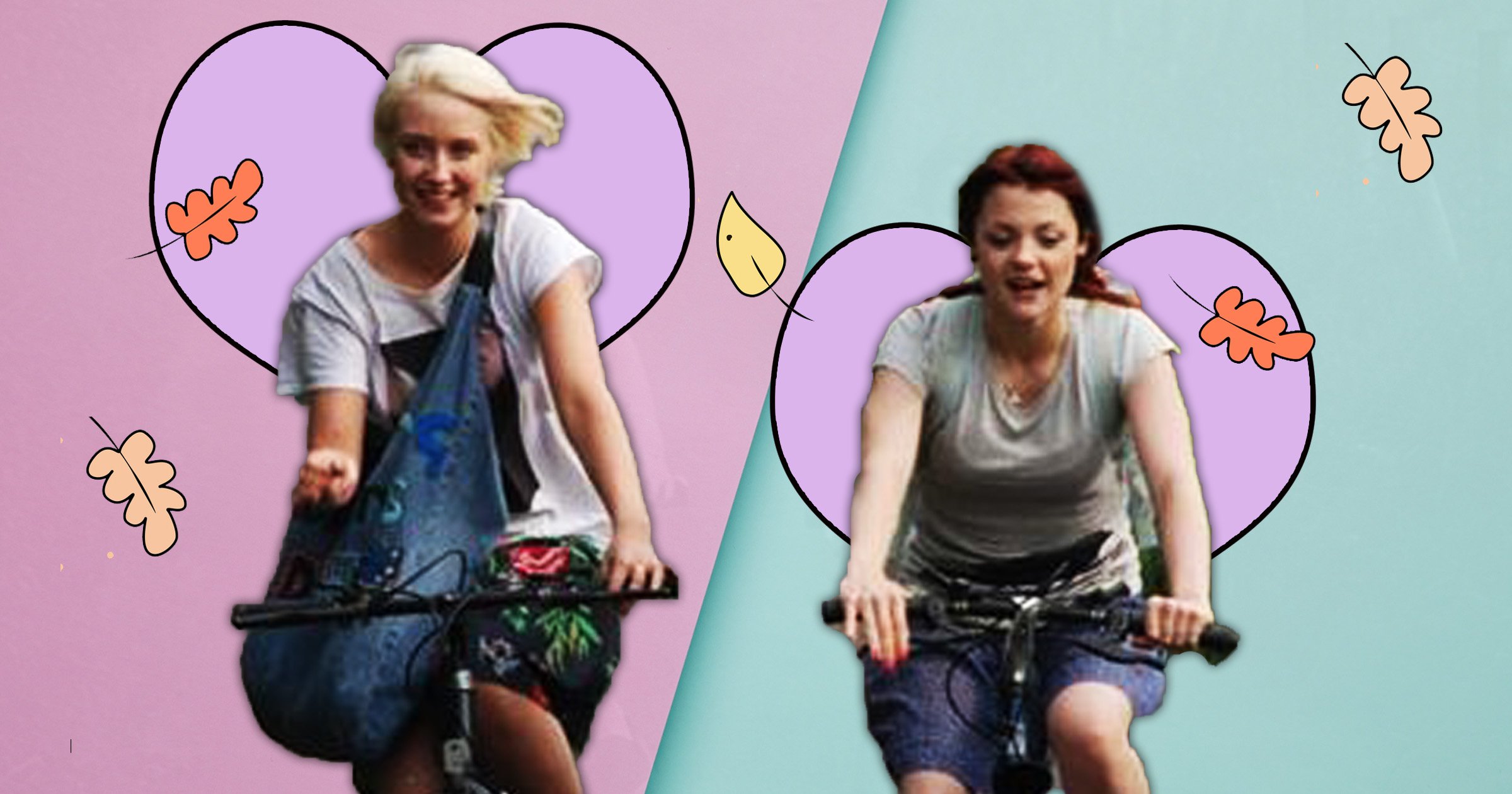 Following the release of Netflix’s beloved teen romance series Heartstopper, many of us have been thinking back to the television characters who came before Charlie Spring (Joe Locke) and Nick Nelson (Kit Connor) and sparked an awakening on our LGBTQ+ journey.

One such show that explored a woman-loving-woman relationship and all the trials and tribulations that come with them was Channel 4’s Skins with Naomi (Lily Loveless) and Emily’s (Kathryn Prescott) romance.

Naomi and Emily came crashing into our lives in 2009 when the second generation of sixth form students started Roundview College, kissing goodbye to Tony Stonem (Nicholas Hoult) and his crew.

After catching each other’s gazes during their introduction assembly on their first day of term, Naomi and Emily’s rollercoaster romance would soon begin, with a whole globe of LGBTQ+ women fawning over them.

For me, Emily and Naomi’s storyline introduced her to the idea of women loving women relationships – and ultimately helped me with my own coming out.

I was 14 when Naomi and Emily were introduced as the new cast of Skins in series three. I would sneakily watch the gritty teen drama on my tiny box TV on the lowest volume so my parents wouldn’t hear.

Naomi and Emily’s blossoming romance was the first time I remember seeing a lesbian relationship on television. The idea that women could be with women never occurred to me as a possibility before this point, it wasn’t something I ever considered. But their relationship definitely awoke something within me.

Throughout the rest of my teenage years, long before I came out to myself, I would find myself repeatedly returning to their episodes and secretly, I think, wanting what they had.

However, for me, at that point in time, the prospect of actually being in a relationship with a woman was so far out of the realms of possibility. So, I would sit and rewatch their episodes together thinking about what it would be like; to be in love with a woman.

But I also remember feeling desperately sad for Emily. She was so confident in herself and her sexuality, while Naomi was struggling to come to terms with her identity.

The heartbreak that Emily felt time and time again when Naomi would let her down would make my heart sink. At the same time though, I could relate to the fear that Naomi was struggling with.

Ultimately, Emily and Naomi really opened my eyes to the idea of lesbian relationships and they played a significant part in my coming out story. They showed me that fancying women was okay.

As Pride month comes to a close, Metro.co.uk caught up with queer women whose lives were changed for the better by their romance.

Naomi and Emily taught Rachael that love wasn’t all pain

Rachael discovered Emily and Naomi when she was 15 and had already had her heart broken twice.

‘I’d fallen in love with my straight best friend (classic), moved on, and found an honest-to-goodness girlfriend,’ she tells us.

‘We went out – mostly over text – for about two weeks before she changed her mind. To her, just a half-hearted teenage relationship. I had had them too, but this was different – this was the first one I cared about. The first one where love songs and clichés and butterflies all actually applied to me, and I didn’t feel like I was playing along. Oh my God, the heartbreak.

‘But Naomily was the first thing I saw that gave my 15-year-old self-hope that it wasn’t all pain. That while the pain was beautiful (and it was, I was a teenage emo after all), it could actually, eventually, turn into something else.’

Recalling her favourite moment, Rachael says: ‘I always remember the scene of Emily and Naomily kissing in the bouncy castle at Pandora’s birthday, arms linking over necks as they dove into something they had both been afraid of.

‘That scene meant more to me than anything that came before or after. It was that moment, of letting go, of only thinking about then, that moment, not what people would think or how things would change. Just that.

‘When Skins Fire aired, I was so excited – Emily and Naomi were going to be back. It was years later, and I was living with my girlfriend at the time. I was happy and secure where I was and I wanted Naomily to be the same. (Spoiler alert: They weren’t. The writers went and buried their gays. Classic.)

‘I was horrified, obviously. And generally just really annoyed. But I had grown, I was confident in myself, and I was able to see it just as a TV show, not an on-screen couple I poured my hopes into. But I’ll always remember the bouncy castle.’

Liz, 22, is grateful that Naomi and Emily gave her a space to see herself. ‘I heavily associate Skins with coming of age, and when you come of age you come to terms with your sexuality,’ she shares.

‘When I was watching Skins, I was figuring out who I was. Seeing Emily and Naomi fall in love (even though their relationship definitely wasn’t ideal) was an eye-opening experience for me as a young queer person.

‘Their relationship was definitely proof that all relationships come with issues and that a sapphic relationship is no exception! It was very much like Santana and Brittany from Glee where my mind was “opened” to the idea that young women can have these meaningful romantic relationships.’

‘I had my first girlfriend when I was 13 and I don’t think I would’ve been as comfortable with that if I hadn’t already seen a major small screen sapphic relationship,’ she adds.

Naomi and Emily gave Penny the queer representation she needed

Penny, 24, watched Skins for the first time when she was 13, and Naomi and Emily’s storyline marked the first time she’d seen two girls kissing on television.

‘It sparked something that I still hadn’t put a finger on,’ she says. ‘Their relationship was such an eye-opener because when I went to high school and I started having proper crushes on girls I knew I was not “wrong” because I had seen it already.

‘It was the first actual sign of representation I came across and it was not over-sexualised, it was not a “bury your gays” trope, it was just two teenagers who were in love. Something that I still hold dear to my heart.’

For Penny, that first kiss is etched in her memory. ‘I think the moment that I still remember from this day was their first kiss when they were on the lake, because that moment was the “Oh, I think I’m like this. I don’t think I’m like the other kids in my friend group”.

She’s thankful too that Naomi and Emily showed a relationship without any tropes. ‘The show treated the characters as they were: two teenagers who fell in love, with all the implications that a hetero couple would have!’

This year marks 50 years of Pride, so it seems only fitting that Metro.co.uk goes above and beyond in our ongoing LGBTQ+ support, through a wealth of content that not only celebrates all things Pride, but also share stories, take time to reflect and raises awareness for the community this Pride Month.

And we’ve got some great names on board to help us, too. From a list of famous guest editors taking over the site for a week that includes Rob Rinder, Nicola Adams, Peter Tatchell, Kimberly Hart-Simpson, John Whaite, Anna Richardson and Dr Ranj, as well as the likes of Sir Ian McKellen and Drag Race stars The Vivienne, Lawrence Chaney and Tia Kofi offering their insights.

During Pride Month, which runs from 1 – 30 June, Metro.co.uk will also be supporting Kyiv Pride, a Ukrainian charity forced to work harder than ever to protect the rights of the LGBTQ+ community during times of conflict, and youth homelessness charity AKT. To find out more about their work, and what you can do to support them, click here.