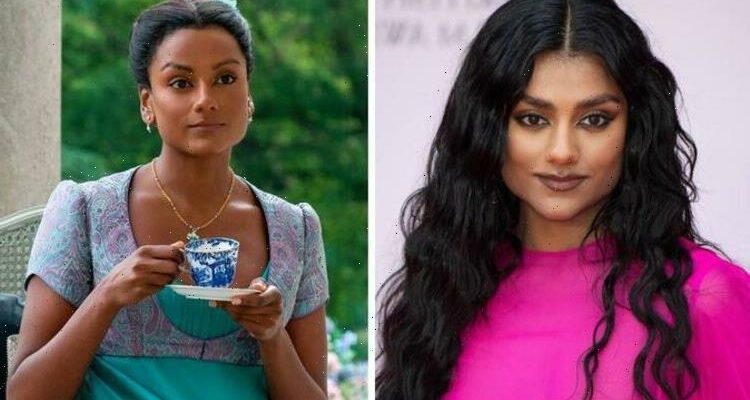 Fans of the Bridgerton book series will know that Anthony Bridgerton (played by Jonathan Bailey) has an ongoing love story with a character called Kate who wasn’t seen in the first season. When Netflix announced the romantic drama would be back for more episodes, it was revealed the plot would revolve around him so subscribers knew Kate was to be introduced. In February 2021, the streaming service revealed Sex Education star Simone Ashley would take on the role of Kate Sharma.

In Bridgerton season one, Anthony was head over heels for Sienna Ross (played by Sabrina Bartlett), an opera singer from a lower-class background.

While he wanted to pursue their relationship, Sienna ended things with him as she knew it wouldn’t work due to the difference in class.

As season two begins, Anthony will be in pursuit of another woman, this time Edwina Sharma (Charithra Chandran).

But before he is able to get to know his potential future bride, he must seek the approval of her older sister Kate (Simone Ashley) first.

Of course, this means Kate herself getting up close and personal with the eldest Bridgerton brother.

So how will their love story unfold and how is Edwina going to react if she starts to see sparks flying between her sister and her possible match?

When Netflix announced Ashley would join the cast, the service tweeted: “Get ready to fall in love with Simone Ashley, who will play Kate in Season 2 of Bridgerton.

“Kate is a smart, headstrong young woman who suffers no fools — Anthony Bridgerton very much included.”

Actress Simone Ashley has been in hit shows such as Broadchurch, Doctors, The Sister and Ryan Reynolds movie Pokémon Detective Pikachu.

But her biggest role to date has been in Netflix’s comedy-drama Sex Education as Olivia Hanan.

In the series, Olivia opens up about her troubles in the bedroom with long-term boyfriend Malek Amir (Armin Karima), asking for advice from resident sexpert Otis Milburn (Asa Butterfield).

Her parts in both Sex Education and Bridgerton have made fans interested to know more about the star’s own love life.

Despite having an active life of dating onscreen, little is known when it comes to Ashley’s romantic endeavours behind the camera.

She rarely reveals anything regarding her personal life and it isn’t believed that she is married or dating anyone.

But even if she was, it seems the 26-year-old would still keep her cards very close to her chest.

On the set of Bridgerton season two, she did have an adorable bond with co-star Bailey.

Speaking to Glamour, Ashley revealed Bailey, who is openly gay, left flowers in her trailer as a welcome present which kick-started an ongoing tradition.

Ashley said: “I would always leave him his favourite snacks in his trailer.

“We had a very unspoken rhythm going on in that sense, leaving gifts in each other’s trailers.”