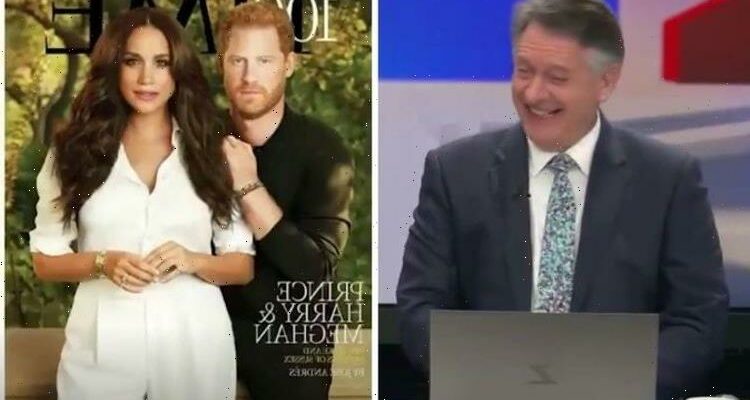 GB News: Simon cracks up at a tweet about TIME Magazine’s front cover

Simon McCoy, 59, could not contain his laughter when he was presenting GB News alongside co-host Kirsty Gallacher, 45, on Thursday morning. The duo were discussing Prince Harry and Meghan Markle’s Time magazine cover which labeled them among the top 100 most influential people. However, Simon burst into laughter when a viewer said Harry looked like the Duchess’ hairdresser.

The GB News host “went off script” when talking about the Sussex’s Time cover to humour viewers with a tweet he received.

He said: “Someone’s just sent me a tweet which said, ‘This looks like Harry is her hairdresser and he is looking into the mirror explaining what he did to her layers.’ You know what, I think they have got a point.”

Harry and Meghan are one of seven covers and the photograph shows the prince standing behind his wife, dressed casually, in front of a background of trees.

Simon continued to chuckle about the amusing tweet he was sent, which left Kirsty in shock.

A gobsmacked Kirsty replied: “Dear me I can’t believe you just did that.”

Simon, who continued laughing at the situation, apologised to Kirsty and the team for “going off script”.

She added: “That’s really tickled you hasn’t it? It tickled him on the break and it tickled him when he brought it back to the show. Oh my goodness.”

The tweet, which was liked more than 68,000 times, was from Grainne Maguire who said: “This looks like Harry is her hairdresser and he’s looking into the mirror explaining what he did to her layers.”
Other users also took to Twitter to comment about the photograph of the couple, with Maria Marsh calling Simon “hilarious”.
Max Hopkins said: “Is it just me or does this picture look like they just photoshopped them together from two different pictures? They don’t even seem to be aware that the other is also in the photo.”
Trish Phoenix added: “This picture says a lot… Harry almost blends in with the background… Yes does look like he’s just finished her hair.”

The photograph of Harry and Meghan is the first time the world-famous couple has posed for a magazine cover shoot together.
Last year, the couple stepped down from royal duties, moving to California and launching their Archewell Foundation.
They also signed a deal for a podcast with Spotify and Harry has done an Apple TV+ series with Oprah Winfrey.
Also included in the magazine’s influential list were US President Joe Biden, former US President Donald Trump, Britney Spears, and Olympic gymnast Simone Biles.

Simon, a former newsreader for BBC News, has been presenting GB News since it launched this summer.
Co-host Kirsty previously worked for Sky Sports News and hosted Kirsty’s Home Videos.
Earlier this week GB News’ chairman announced he was Andrew Neil stepping down as host of his own primetime show three months after its launch.
He had only presented GB News show for two weeks after the channel’s launch before going on a summer break to his home in France.