LOTS OF KIDS, A MONKEY AND A CASTLE ★★★½
MA15+, 88 minutes. Australian Centre for the Moving Image, Thursday 7 to Tuesday 26 February

Built around a family home in a castle that would make Wes Anderson weep with envy and a matriarch whose every pronouncement veers between high drama, mocking revelation, and dismissiveness, this Spanish documentary is an intimate portrayal of a clan literally living with their shared history. Veteran actor turned filmmaker Gustavo Salmeron is the youngest of six children to Julita and Antonio, a yin and yang pairing dominated by the former: the film's title is based on what she wanted in life, and somehow got (although the monkey did bite her). Predicated on a rhythm built up over decades, mother and son are filmed debating how the film should be made, and as more family members arrive screwball chaos takes hold. Julita's hoarding literally provides reams of material – there's a running theme of trying to find her grandmother's bones – but the memories are also connected to Spain's fractious 20th century political history. The 21st century global financial crisis also hits hard, but as with everything in this droll film it has a fantastical edge. 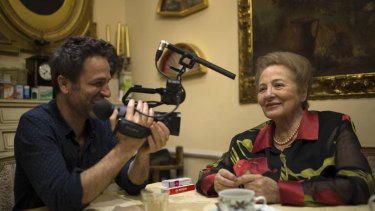 Lots of Kids, a Monkey and a Castle is a Spanish documentary that offers an intimate portrayal of a clan literally living with their shared history.

ONCE UPON A TIME IN AMERICA ★★★★
melbournecinematheque.org. Australian Centre for the Moving Image, Wednesday 6 February.

The 2019 program of the invaluable Melbourne Cinematheque kicks off with an opening night bang (and its many screen echoes): Sergio Leone's epic crime saga uses the hardscrabble ambitions of two aspiring New York gangsters to chart a vision of friendship and the accompanying recrimination that spans five decades and the souring of American self-belief. Excoriated just prior to its American release in 1984, when a compromise 229 minute edit was brutally cut to a failed 139 minutes, Leone's final movie screens here as the essential 2012 restoration that across 251 minutes uses a complex flashback structure to capture the lives of David "Noodles" Aaronson (Robert De Niro and as a boy Scott Tiler) and Max Bercovicz (James Woods and Rusty Jacobs). The vast, dazzling sets and historical references don't serve to fix the story, they free it – there's a haze of memory and purpose that offsets the gangster machinations as tellingly as Ennio Morricone's score does. This is a long way from the spaghetti western stand-offs that made Leone's name internationally, and a fitting finale.

The Juliette Binoche retrospective season accompanying ACMI's exclusive screening of her lead performance in Let the Sunshine In still has nine days to run, and the highlights include 2014's Clouds of Sils Maria (4 and ½ stars, MA, 124 minutes). Olivier Assayas' remarkable movie reveals emotional transference, the force of popular culture, and the depths of female relationships through the manoeuvres of Binoche's Maria Enders, a famous European actress, and Kristen Stewart's Valentine, her American personal assistant. They're linked through the text of the play that made Maria a star two decades prior, and which she returns to now in the role of an older woman – their sessions running lines in the Swiss mountains have a taunting, consumptive energy, and Binoche is compelling as an artist whose preparation blurs boundaries.