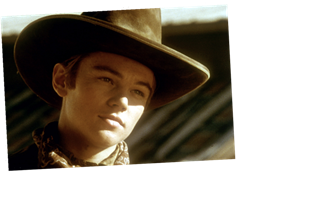 In between scoring his first Oscar nomination with “What’s Eating Gilbert Grape” (1993) and the career-making releases of “Romeo + Juliet” (1996) and “Titanic” (1997), Leonardo DiCaprio starred in three 1995 releases that shaped his image as a rising actor: “The Basketball Diaries,” “The Quick and the Dead,” and “Total Eclipse.” The middle title starred DiCaprio opposite Sharon Stone in a Sam Raimi-directed revisionist Western about a woman gunslinger (Stone) who visits a frontier town and clashes with its leader (Gene Hackman). Stone was a producer on the project and reveals in her new book, “The Beauty of Living Twice” (via Insider), she paid for DiCaprio’s salary herself after studio TriStar Pictures refused to cast him.

Stone recalls the studio telling her, “Why an unknown, Sharon, why are you always shooting yourself in the foot?’” Although DiCaprio had bagged an Oscar nomination at that point, his star power as an actor was untested.

“The studio said if I wanted him so much, I could pay him out of my own salary. So I did,” Stone writes.

Stone also had to stand up for director Raimi. The actress claims she had to fight to hire Raimi on the project because the filmmaker’s past projects such as “The Evil Dead” and “Army of Darkness” led the studio to believe Raimi was a “D-movie director.” Stone says she told TriStar that Raimi “would work nearly for free as an enticement,” and the studio hired him soon after.

“Getting a producer credit as an actress is often thought of in my business as a ‘vanity deal,’ meaning they pay you for the job but shut the fuck up and stay out of the way,” Stone writes about using her producing power to fight for talent she believes in. “I won’t accept a vanity deal and let them know that upfront. This is illegal, I say, and I like to work within the law. That gets a lot of silence and not a lot of joy on the other end.”

Stone’s book, “The Beauty of Living Twice,” is now available to purchase.

Products featured are independently selected by our editorial team and we may earn a commission from purchases made from our links.