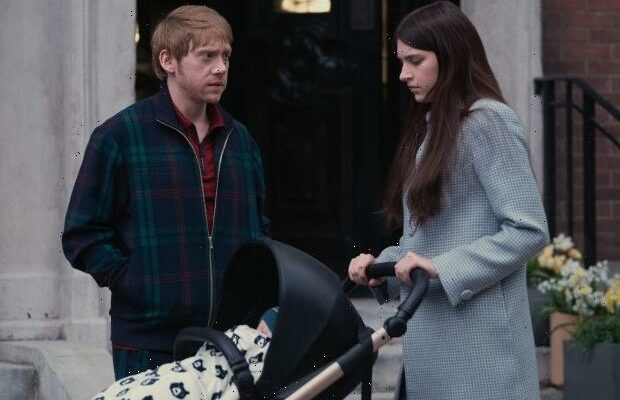 The Turners may have survived the wrath of Aunt Josephine and gotten their precious baby Jericho back in the process, but their supernatural trauma is far from over.

While things seem back to normal for Dorothy and Sean at the top of Servant‘s Season 3 premiere (now available to stream on Apple TV+), nanny Leanne is quietly suffering from intense nightmares and paranoia. She’s also still hiding that strange, sharp dagger under her pillow. Just in case. When a moth dies after repeatedly slamming into her window, she tries and fails to revive it.

But her paranoia is all-consuming. She wonders why Dorothy and Sean freely leave the door open. After peering outside for someone who’s not there, she abruptly slams the door. Dorothy assures her that if someone were going to come for her, he or she would’ve come by now.

Sean asks Julian to take a walk outside with Leanne, who’s become somewhat of an agoraphobe lately. The sounds of the city immediately overwhelm her. We learn that Julian and Leanne have been continuing their sexual relationship, though he tells her she should be getting busy with someone her age. “Someone with abs” and a defined hairline, he says. But Leanne shuts him down. She’s happy with what they’ve got going on. She breaks conversation midstream to accost a random old guy who turns out to be… just a random old guy. After realizing her mistake, she flees back to the safety of the brownstone.

At night, Leanne triple checks the lock on the window, as another moth emerges from a hole in the wall. She falls asleep with her hand gripping the blade.

The family heads out for a day trip to the beach with Julian’s new gal-pal Vera, whom he met in rehab. Leanne bails on the beach, much to Dorothy’s dismay, so the Turners head out without her. Alone in the house, she collects multiple dead moths at her windowsill and disposes of them. After FaceTiming with Sean, she pops open some wine in the basement and begins journaling. As the murky water in the basement suspiciously bubbles up (your guess is as good as mine, my friends), she manically draws tons of birds in the notebook. Lo and behold, Julian is attacked by a flock of seagulls while hanging surfside. 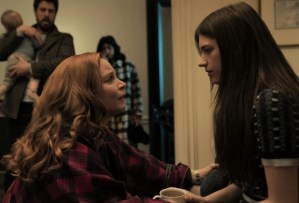 Later, an intruder breaks into the home and raids Dorothy’s jewelry. Leanne slowly backs out of the room and sneaks into a closet, where she FaceTimes Sean, who promises to call the cops. After accidentally making a loud noise, she hides in the crawl space in her bedroom. Beside her is Josephine’s dead body (which we saw in last season’s finale), only now it’s covered in hundreds of moths, which fly into her face and land in her hair.

By the time the police arrive, the robber seems to have escaped. When the Turners get back home, Dorothy apologizes for leaving Leanne alone. The cops say the intrusion was probably related to a series of break-ins that have been terrorizing the neighborhood. An open skylight in the attic seems to confirm their theory, but Leanne’s mysteriously missing blade begs to differ.

At bedtime, Dorothy attempts to pacify the nanny, but another moth fluttering near the lamp shade continues to tweak the girl’s anxiety.

Was the intruder part of the cult? And what’s the deal with the moths? Grade the premiere below, then hit the Comments.