Selena Gomez has a new favorite show! The 28-year-old singer and actress couldn’t help but praise the new Netflix program Selena: The Serieson her Instagram Story.

Gomez, who was named after fellow Texas native Selena Quintanilla, shared how much of an “inspiration” the late Tejano singer is to her, and encouraged her followers to watch the show. Gomez began by greeting her fans from the set of her new TV series, Only Murders in the Building.

“I wanted to check in and say hi and that I have been binge-watching the Selena series on Netflix. It’s so good,” Gomez commented on Tuesday. “She’s such an inspiration. I was named after her and it’s unbelievable.” 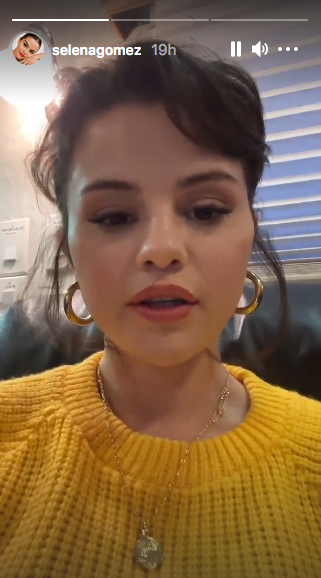 Selena: The Series follows the rise of Quintanilla, the Mexican American singer who was tragically killed in 1995 at the age of 23. The show stars Christian Serratos in the lead role. While there have been some mixed reviews on the show’s Part One, Serratos previously opened up to ET about the “pressure” of portraying the iconic Latina and taking over Jennifer Lopez’s breakout role in the 1997 film Selena.

“I felt so much pressure to be and bring Selena back to the screen,” Serratos confessed to ET during a set visit. “I know what an important role this is and I know how important it is for all her fans and her family, so I definitely worked really hard to try and be as honestly Selena as I could.”

Quintanilla’s sister, Suzette, also gave ET some insight on what viewers would see when they dove into the series. She explained that the first part would be filled with more intimate moments between their family.

“The difference is that the series is about the actual journey of us being a family, struggling to understand and figure out this musical part of us that we didn’t really realize that we had,” Suzette explained. “A lot of the growth of Selena y Los Dinos, basically, and the journey. I like to call it my life journey, our family’s life journey, really.”

“This series is more about all the questions, the little things that Selena’s fans have been asking throughout the years like, ‘Why was this song created or why this?'” she noted. “It’s more about filling in the full story of our journey and hopefully inspiring those who are going on a journey of their own. And whatever their dream is, to understand this was not a rise to fame right away. It was not like that. It took quite a bit of years and a lot of hardship as a family and being able to get where we were before she was ultimately taken from us.”

Selena: The Series is now streaming on Netflix. Hear more of what Suzette shared with ET, including the scene that made her cry, in the video below.