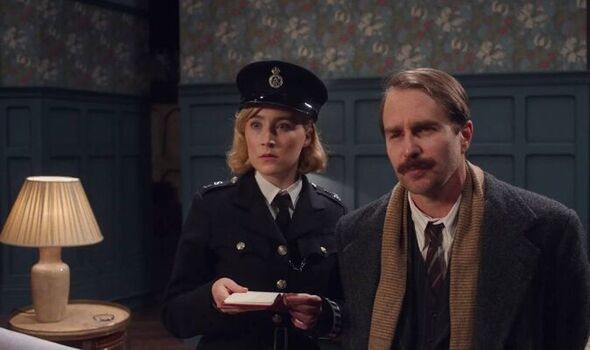 The reason why is explained midway through this wildly inventive and often hilarious take on Agatha Christie’s play. It’s 1953 and film producer John Woolf (Reece Shearsmith) has snagged the rights for Theatreland’s latest smash hit when he notices a clause Christie has inserted into the contract.

Production on a film adaptation can only start six months after the play has closed. But does the famous film producer hope to end the play’s run by turning its theatre into a crime scene?

That’s just one of the questions posed by this hugely enjoyable farce.

Director Tom George and screenwriter Mark Chappell have found a loophole by staging a whodunnit within the whodunnit.

The original cast are celebrating the play’s 100th performance in the Ambassadors Theatre’s bar when the body of a Hollywood director is discovered.

At the celebrations, a drunken Kopernick had incurred the wrath of the play’s star Dickie Attenborough (a very funny Harris Dickinson).

The prissy Cocker-Norris had clashed with the crass American too. And it turns out Kopernick had blackmailed Woolf into paying for his plush suite at the Savoy.

In the tradition of the Christie adaptation, screentime is divided among an ensemble cast with juicy supporting roles for Shirley Henderson, Ruth Wilson and the great Tim Key.

But its greatest strength is the chemistry between its two leads.

If Hollywood is looking for a new franchise, I suspect Rockwell and Ronan’s sleuths could run and run.