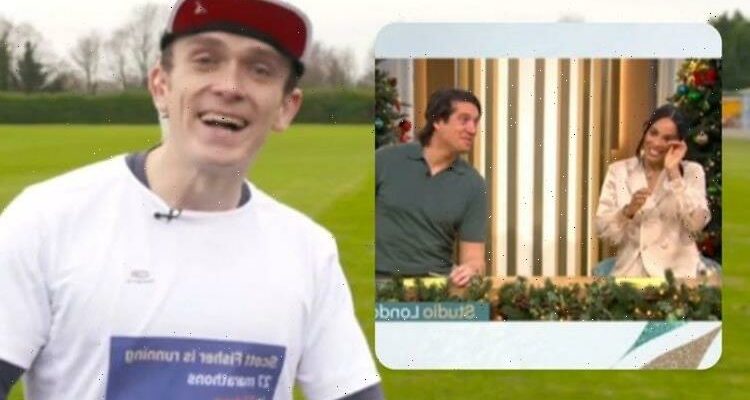 This Morning: Rochelle and Vernon emotional over guest's story

This Morning presenters Rochelle Humes and Vernon Kay were left feeling emotional and in tears after hearing the heart-warming reason Scott Fisher is running 27 marathons in 27 days. Scott Fisher’s JustGiving campaign is to raise awareness for Mast Cell Action, which his wife Megan suffers with daily. Rochelle was left in tears after Scott revealed how grateful he was for their support as This Morning donated £1,000 to his JustGiving page.

As they concluded the interview and surprising Scott with the £1,000 donation, Scott told Rochelle and Vernon: “You kind of put me on the back foot there because I wasn’t expecting that!”

Trying to hold back her tears, Rochelle turned to Vernon and said: “He’s got me now.”

Scott joked: “I’m obviously not allowed to cry on TV,” as Rochelle exclaimed: “Well, we are!”

Before Scott started his mission, Rochelle said: “Well, we are with you, we really really are, and donation side, we will be thinking of you.

“Best of luck! Send our love to Megan too and to your family, and I hope you have a wonderful Christmas together.

“[And] I really hope that you’ve got all the support and everything else you need for these 27 marathons too.”

“[But] Listen, my friend, Scott, just plough through, buddy, we are all with you, and we are all thinking of you, and hopefully, well, we know that the This Morning audience are fantastic!”

Scott then headed off on yet another marathon but later in the show, the presenters gave an update on the amount that had already been raised for Scott’s JustGiving page.

Rochelle said: “It’s making me emotional I keep getting a real knot in my throat.”

Vernon continued: “We all welled up when Scott said that his wife had taken a turn for the worst today, and she ended up in hospital, he got emotional.

“We have managed to raise so far, every time we refresh it, it is completely different it keeps going up and up and up.

“He wanted to raise 27 grand, this is massive, and everyone in the studio, the whole crew, is submerged in this story.”

And Vernon and Rochelle’s hopes were met as the £100,000 mark was surpassed before the show ended.

During their conversation continued, Vernon yelled: “IT’S JUST GONE! Pull it up, pull it up! Yes! Amazing, that’s what it’s all about!

“It’s the season of goodwill, thank you so much!”

Viewers of the show were in full support of Scott and his 28 marathons, as they took to Twitter to share their support.

@CarthyRobbie praised: “When the going gets tough, you can always rely on the public to dig deep! Absolutely amazing scenes on @thismorning raising that amount for that family, well done!”

@faithbxx: “#ThisMorning genuinely brings me such joy, seeing the viewers raise £100k for Scott & his wife Megan in a matter of minutes is such a light in a world when everything is chaos.”

She has been struggling for three years and went from being a national equestrian competitor to being wheelchair-bound, needing a feeding tube, and needing 27 pills a day to keep her alive.

MCAS is a disease from which many suffer, but unfortunately, there isn’t a lot of help for the condition.

On his JustGiving page, Scott wrote: “Counting out those 27 pills one day gave me an idea about how I could draw attention to the problem and help to change it.

“I decided I’d run 27 marathons in 27 days over this Christmas, to raise £27,000 for Mast Cell Action, the charity devoted to helping patients with MCAS.”

This Morning airs weekdays from 10am on ITV.