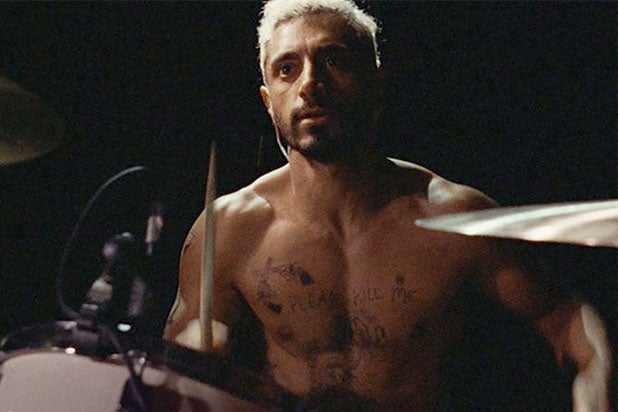 In “Sound of Metal,” Riz Ahmed stars as a volatile bleach-blond drummer named Ruben. He’s on tour with his girlfriend (Olivia Cooke), the lead singer in their heavy metal band, traveling to heartland gigs with all their audio equipment in an RV. One morning he wakes up to discover that he is deaf. The condition, he soon learns from a doctor, is permanent.

Debut director Darius Marder (co-writer of “The Place Beyond the Pines”) envelops viewers completely in Ruben’s unexpected journey, which leads to a rural halfway house for recovering addicts with hearing loss. Ahmed, the British actor and rapper (“Rogue One,” “The Night Of,” “Nightcrawler”), brilliantly embodies the vulnerability and the resilience of his character.

His performance, destined to be much cited during awards season, was also shaped in tandem with Nicolas Becker, a French sound designer and musician who worked on the film’s daring, experimental soundscape, which immerses the audience in Ruben’s experience. Instead of dead silence, Becker’s approach highlights the muffled disorientation of sudden deafness. Through subtle uses of sound, we are made aware of its absence.

Becker’s credits in the sound department include movies as diverse as “The Impossible,” “127 Hours,” “Sunshine,” “American Honey,” “Arrival,” “Ex Machina,” and “Gravity.” The latter title, Alfonso Cuarón’s outer space blockbuster in which Sandra Bullock is stranded in Earth’s orbit, proved an essential touchstone for Becker’s challenge with “Sound of Metal.”

“‘Gravity’ was a real starting point for me,” Becker told TheWrap. “We know that there is no sound in space, but your body has a sound. I had the chance to spend time underwater and in anechoic chambers, which are totally mute. You can feel things and hear things through your body. Vibration goes through air and also through solids. So in ‘Gravity,’ when we needed a slight sound while a character was using a drill, I attached a microphone to my arm and used my flesh as a sound filter. That’s what you can hear in the movie.”

As Ruben is struck by deafness in “Sound of Metal,” ordinary noises, like music, traffic, and voices, are interpreted as if from under the sea — an effect that also harkens back to Sandra Bullock spinning through space. For both “Gravity and “Sound of Metal,” Becker placed microphones in pools in order to achieve the dislocating vacancy of sound. “Underwater everything becomes mono and you feel lost,” Becker said. “Your brain doesn’t get enough information to localize sound, so you don’t know up from down.”

For this film, Becker built a DIY headpiece of stethoscope microphones that could record the subtlest body noise, including the sound of Ahmed’s eyelids closing. “I also put a microphone in his mouth to record the noise from inside the body,” Becker further explained. “I used extremely sensitive stethoscope mics to record his heartbeat and his blood pressure and the movement of his tendons. We all experience these noises, usually unconsciously, so I had faith that the audience would connect with it. They understand the vocabulary from their own bodies.”

Becker also fitted devices into Ahmed’s ears to simulate hearing loss. But Becker insists that most important was Ahmed’s preparation for the role, which included a year of studying drums and sign language. An actor’s commitment, Becker said, makes the sound designer’s job richer and more collaborative: “I love when we make the experience true, somehow merging a documentary approach with a fiction approach. And when you have an actor like Riz, who learns so much of his role by heart, there is little separation between these. Life and art can be one thing.”

Becker also noted how the soundscape changes as Ruben adapts to his new circumstance. “There are subtitles in the film, which only appear as Ruben has begun to understand sign language,” he said. “And that influences the sound design. At the start of the film there is a subjective audio language — but as Ruben adapts, we wanted to make it easier for the audience to understand as well.”

Indeed, while “Gravity” was a study in suspense, “Sound of Metal” does not use Ruben’s deafness as a scare device. “It’s about how you or me or anyone deals with problems in their life,” Becker said. “When we have tough challenges and have to adapt ourselves around them — that is what this film is about.”

No scene better illustrates this as much as one late in the film, when the audio is eliminated completely from the soundscape. Suddenly the film is bathed, remarkably, for the first time, in silence.

But not exactly. “It isn’t actually silence that you experience in that moment,” Becker clarified. “It’s a void. And then the sounds of life, whether you are watching the movie in a theater or in your own home, come back into the room. It’s similar to John Cage’s 4’33”, where the conductor and the orchestra come onstage and do nothing for four minutes and 33 seconds. Instead, everybody feels the environment and the human tension. And you realize that this, the audience, we are the real world. And music is the intrusion.”

It’s quite something for a sound designer to praise the elimination of sound, but Becker doesn’t mind. And his deep, idiosyncratic work on “Sound of Metal“ speaks, as they say, for itself.  “In recent years a lot of cinema hit a wall of more editing, more sound, more visual effects, more everything. So I enjoy films like this one that a bit less performative and more immersive, more personal, more intimate. I like giving more credit to the audience.”

“Sound of Metal” opens in theaters on November 20 and begins streaming on Amazon Prime on December 4.