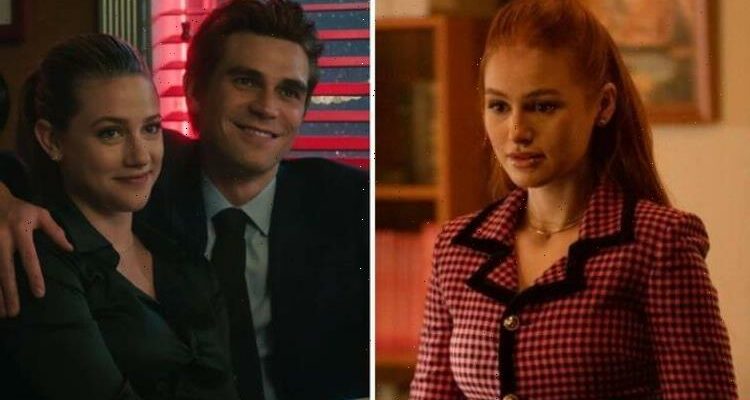 Riverdale will be back on The CW and Netflix to pick up from where it left off with season six. The comic-book based teen drama has a legion of loyal fans who have watched the Core Four go from crime-fighting teenagers to young adults, still with a love of solving mysteries. When season six premiered, it was a slightly different world to what viewers have been used to though.

In the Riverdale season five finale, Hiram Lodge (played by Mark Consuelos) did his last evil deed: planting a bomb underneath Archie Andrews’ (KJ Apa) with him and Betty Cooper (Lili Reinhart) inside.

The explosion caused a major shift which led to the season six five-episode event of Rivervale.

Set in the parallel universe where supernatural goings-on are the norm, Rivervale had seen a number of disturbing storylines.

From Archie being sacrificed and Toni Topaz (Vanessa Morgan) taking on the role of spirit La Llorona to Jughead Jones (Cole Sprouse) and Tabitha Tate (Erinn Westbrook) haunted by a murderous ghost, a lot went on.

Nevertheless, by the fifth episode, the Rivervale gang found out about the rip in the universe and to make sure normality was restored, Jughead agreed to stay locked in the underground bunker to write Riverdale stories forevermore.

Rivervale is done and dusted with so when the series does return, it will be back to regular Riverdale.

As with every season, there is sometimes a hint of the supernatural but no ghouls or real dark magic will be featured.

However, there is going to be a schedule shake-up with the drama not returning to its previous timeslot.

Riverdale used to air every Wednesday on The CW before season six started airing a day earlier on a Tuesday.

This will no longer be the case when season six continues as for the first time ever, the show will be on the weekends.

Riverdale season 6B is going to premiere on Sunday, March 20, on The CW at 8pm ET.

For Netflix US subscribers, the series doesn’t come out until eight days after the finale airs in America so they may not get access to the season until the summer of 2022.

Thankfully, it is a different story for subscribers who live outside of the States.

Once again, new episodes of Riverdale will be released a day after being shown on The CW.

This means that UK fans of Riverdale can catch up on the premiere of season 6B on Monday, March 21, on Netflix.

Going by the episode’s synopsis, there will be plenty of fall-out following Hiram’s actions.

The Riverdale season six midseason premiere will be called Unbelievable.

The description reads: “As news begins to spread about the bombing at the Andrew’s home, Archie, Betty and Jughead begin to deal with mysterious side effects from the explosion.

“Elsewhere, Veronica spirals after learning that Hiram may have been involved, and Cheryl is consumed with guilt when she believes she may have had a hand in the explosion.”

Riverdale season 6B will premiere on Sunday, March 20 on The CW in America. The same episode will be available to watch on Monday, March 21, on Netflix UK.