Power Women Breakfast Washington, DC: Terrell says the system is rigged against women — but it can be fixed 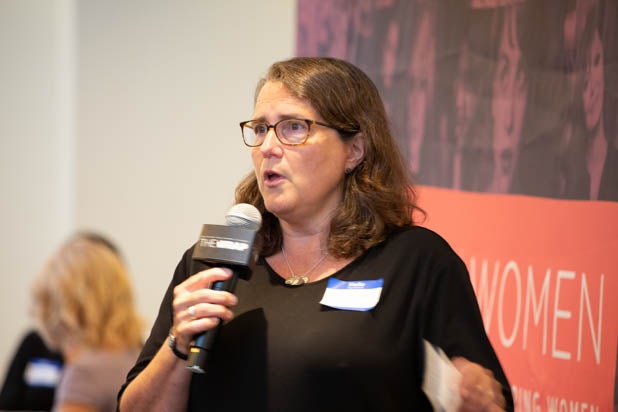 The electoral system is rigged against women in the U.S., Cynthia Terrell, founder and executive director of RepresentWomen, said Thursday at TheWrap’s Power Women Breakfast in Washington, D.C.

While noting that the U.S. continues to lag far behind other countries worldwide in female representation in elected office, Terrell said that there are concrete steps that can be taken to correct the situation.

The current electoral system is winner-take-all, she said, and it protects incumbents and fortifies the status quo. But she suggested that a “ranked-choice” voting system, like the one used for voting on the Best Picture Oscar, could level the playing field.

In addition, Terrell outlined four steps that the U.S. could take to combat the gender disparity in legislatures at both the federal and state levels.

1. Recruitment rules
In recruiting candidates, both political parties and outside funding groups could set quotas or at least numeric targets to ensure that women have a chance to compete. “Gender targets for political parties and PACs — that mimic the international actions used around the world — ensure that more women run,” she explained, noting that PACs could guarantee that a minimum percentage of their funding in each cycle go to female candidates.

2. Fair voting systems
A move away from winner-take-all elections could also address the current imbalance, she said, noting that in foreign countries “ranked choice voting for executive and legislative races enables more women to win.”

3. Modernized legislative rules
There are currently many obstacles that discourage even qualified women from entering races at all levels, Terrell said, adding that legislative solutions can address some of these obstacles. “Onsite childcare, use of campaign funds for childcare, nursing rooms and fair pay ensure that more women can serve effectively,” she said.

4. Diverse interview slate requirements
Terrell’s RepresentWomen group has proposed the Rankin-Chisholm Rule, modeled on the NFL’s “Rooney Rule,” to insure that a diverse pool of candidates is interviewed or considered for every open position — whether it’s a judicial appointment or a legislative office job or a pool of candidates for an open seat or appointed position. The rule, named for pioneering female legislators Jeannette Rankin and Shirley Chisholm, “elevates the importance of gender in the hiring and appointment of judicial offices, cabinet members, commissions, congressional and campaign staff and party leaders so that more women lead in politics,” she said.

Ultimately, Terrell’s goal is to change the system, not those she sees as marginalized by it.