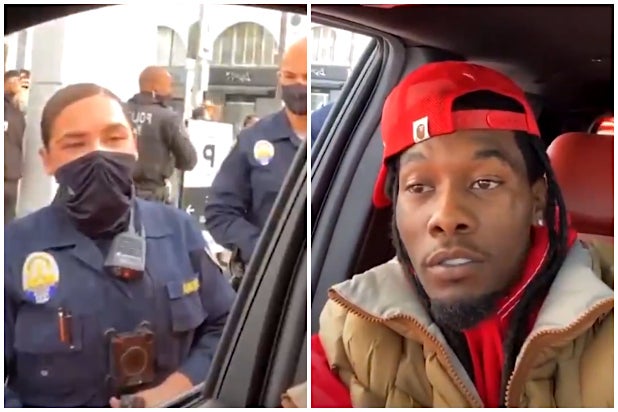 Rapper Offset was removed from his vehicle and detained by Beverly Hills police Saturday night, and he caught the whole thing on Instagram Live.

In the IG video – which you can see below and was watched by more than 30,000 people live – the rapper is in his vehicle and was confronted by officers, who instructed him to turn off the engine. He, however, insisted on leaving his hands on his steering wheel, “because you got guns out,” he told them.

Police told him at the scene, “We were told that you guys were waving guns at people.” Offset responded, “You just watched somebody beat my car up with a flag. What are you talking about?”

They opened his door and removed him, which is where the video ends. Contrary to initial reports, the rapper was not arrested.

“There have been media reports that entertainer Offset was arrested. Those reports are inaccurate,” Beverly Hills Police Lt. Max Subin wrote in a statement. Officers stopped his vehicle after it was reported that someone near a pro-Trump rally was brandishing a gun.

Subin added that the person who had a gun pointed at them was a demonstrator.

According to the Beverly Hills Police Department, Marcelo Almanzar, 20, was arrested nearby charged with carrying a concealed weapon and carrying a loaded firearm in public.