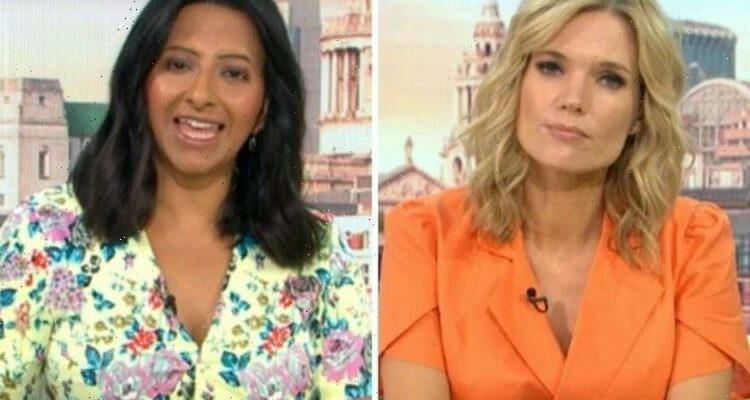 Wednesday’s Good Morning Britain saw Ranvir Singh and Charlotte Hawkins discussing the current news headlines. One of the main topics of discussion was the latest reports coming from Afghanistan. They also spoke about former Royal Marine Pen Farthing, who claimed on Tuesday’s programme he had been “cut off” from the Ministry of Defence. It has now been reported the MOD are arranging for Pen and his animals to be flown home. However, throughout the show, viewers appeared to get frustrated with Ranvir for speaking over Charlotte and her guests.

Viewers accused the Strictly star of talking over former Defence Secretary Michael Portillo during an interview about Afghanistan.

They also appeared to get annoyed during a segment about the Paralympics.

“That was great news, an amazing win,” Charlotte continued to say before Ranvir interrupted: “That’s her 15th gold, isn’t it?”

Despite Ranvir interrupting her, Charlotte continued to finish what she was saying.

“It’s absolutely brilliant,” Charlotte could be heard saying as Ranvir spoke on top of her: “Let’s go to Sarah’s hometown of Manchester.”

The duo proceeded to chat to Brian Facer, the CEO of British Cycling via video link about Sarah’s victory.

As Brian began to speak about how proud he was, Ranvir kept trying to interrupt him by saying: “Can you?”

“What a start to the Paralympics. Gold and silver, amazing,” Brian said before Ranvir chipped in: “Can you just talk us through it because of course, as we haven’t seen it here yet.

“Can you just tell us how she performed and how Crystal performed?”

Brian replied: “Sarah went out on the track really early and quickly in the first lap.

“She actually caught Crystal in the seventh lap. It was such a strong ride.”

However, viewers were left unimpressed by Ranvir’s interruptions, with many taking to social media to share their frustrations.

One wrote: “Can’t believe you interrupted a discussion on the situation in Afghanistan to report on this. Great news but hardly a priority.”

Another penned: “WOW Charlotte has been allowed to speak.”

A third raged at Ranvir: “Please let people speak before asking your next question!!”

“Is Ranvir the chief today? She keeps talking over everyone,” a fourth tweeted.

A fifth pointed out: “Ranvir should ask questions and not make a point before asking the question. Annoying!”

A sixth commented: “I’m starting to feel sorry for Charlotte sitting there like a lemon while Ranvir constantly talks over her.”

While another said: “Ranvir is annoyingly long-winded and disruptive! Let others speak!”