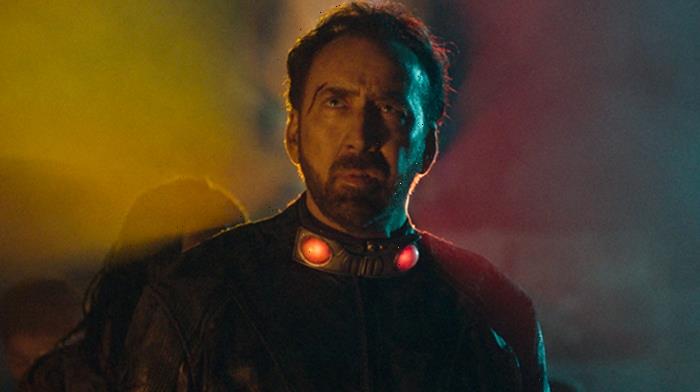 Nicolas Cage has made a lot of crazy movies, but he himself has claimed that Prisoners of the Ghostland “might be the wildest movie” of his career.

In this gonzo curiosity from director Sion Sono (Why Don’t You Play in Hell?), Cage is a convict who gets sent into a surreal wasteland to rescue the granddaughter of a warlord. It’s kind of like Escape From New York meets Mad Max: Fury Road meets ketamine.

Watch the Prisoners of the Ghostland trailer below, and watch out for the Rat Man and his Rat Clan.

Prisoners of the Ghostland Trailer

If you ever wanted to see Nicolas Cage wear a leather jumpsuit that has bombs strategically placed around the testicles, have I got a movie for you! It’s Prisoners of the Ghostland, a weird sci-fi Western action-horror extravaganza from filmmaker Sion Sono. Here’s the synopsis:

In the treacherous frontier city of Samurai Town, a ruthless bank robber (Nicolas Cage) is sprung from jail by wealthy warlord The Governor (Bill Moseley), whose adopted granddaughter Bernice (Sofia Boutella) has gone missing. The Governor offers the prisoner his freedom in exchange for retrieving the runaway. Strapped into a leather suit that will self-destruct within five days, the bandit sets off on a journey to find the young woman—and his own path to redemption.

I caught Prisoners of the Ghostland at Sundance earlier this year and really enjoyed it. It’s definitely not going to be for everyone, but it worked for me. It’s the type of movie where characters show up and say stuff like, “You’re fortunate that the Rat Man and the Rat Clan found you by the side of the highway and brought you to the Ghostland!” You’re either on board with that sort of thing, or you’re not.

Our own Ben Pearson reviewed the movie, and while he didn’t enjoy it as much as I did, he did write: “A maniacal whirlwind of cinematic insanity, it feels equally likely that Prisoners of the Ghostland could become a cult classic or disappear into the fog. Whether its overall inscrutability is a bug or a feature remains to be seen.”

When Nicolas Cage was first announced to star in the movie, he offered an intriguing comment:

“I’m thrilled about it! It’s unlike anything I’ve ever read before. It might be the wildest movie I’ve ever made, and that’s saying something. It’s out there. I wear a skintight black leather jumpsuit with grenades attached to different body parts, and if I don’t rescue the governor’s daughter from this state line where they’re all ghosts and bring her back they’re gonna blow me up. It’s just crazy. It’s way out there.”

So is Cage telling the truth? Is this his wildest movie? Honestly, I’d say no. Mandy is a far wilder (and better) film, and that’s just off the top of my head. Still, Prisoners of the Ghostland is definitely worth checking out, and Cage is definitely not phoning it in, that’s for sure.

RLJE Films will release Prisoners of the Ghostland in theaters and on VOD and Digital on September 17, 2021.