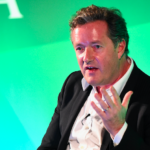 “It is a farcical situation and, of course — as with all these situations at the moment — the cancel culture Twitter mob comes for you and says if you don’t believe Meghan Markle you are a racist, to which I say I’ve never said a racist thing about Meghan Markle or anybody else,” he insisted, adding, “We’re hearing too much of your yapping, too much of your whining. It’s time to pipe down.”

The parents of two aren’t Morgan’s only targets, of course. Earlier this month, he went after tennis star Naomi Osaka after she, too, spoke out about her mental health. He called her “spoiled.”

Watch above, via Fox News.