Piers Morgan, 54, and his co-host Susanna Reid, 48, were joined by Charlotte Hawkins, 44, on the show today to deliver the news bulletins throughout the course of the programme. However, when the Good Morning Britain presenter tried to inform viewers of some breaking news, the opinionated host was irritated by the fact the update on Brexit didn’t seem too significant.

Before the show went to an advertisement break, Charlotte announced news had just reached the studio, with the breaking news banner flashing across the screens.

The newsreader announced Prime Minister Boris Johnson, 55, had met with DUP leader Arlene Foster, 49, and the pair had been in talks about the Brexit.

Adding to the information, the presenter went on to add a new deal for Brexit would be announced later this morning.

Piers didn’t believe this was worth stopping the show for and labelling it as breaking news as Charlotte had no information on what the deal would be. 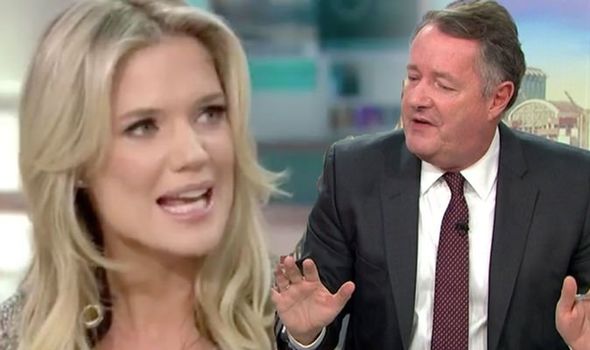 As the host interjected her segment, Charlotte hit back: “It’s like taking a camel.”

Piers commented it wasn’t worth a breaking news label, to which his co-star told him: “We’re alerting people to new information.”

The opinionated presenter still didn’t understand why the show had been stopped, to which the newsreader added: “More proposals are coming later,” containing the news was a “significant development” for Brexit.

Charlotte was getting more irate with her colleague and as the pair rowed about the subject, the presenter said: “I will tell you what, there will be a major incident in the GMB studio.”

In an unusual break from her placid character, Charlotte told Piers to “zip it,” with the host mocking her outburst.

Explaining once again why her segment was important, the newsreader adde: “I’m trying to tell people some breaking news.

“Stop putting in,” she told her co-star.

As Charlotte shook her head at the controversial host’s disproval of her news segment, Piers and Susanna then took the show to a break.