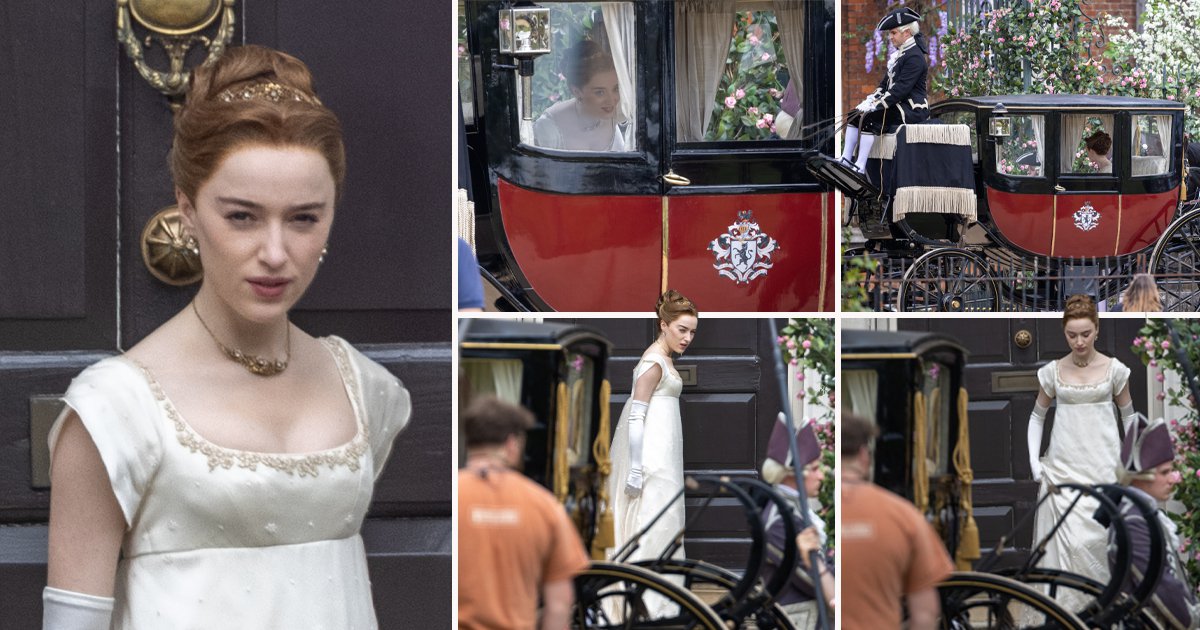 The actress was spotted on set in character as Daphne Bridgerton exiting a house and hopping into a horse drawn carriage.

She was dressed in a long flowing white dress with matching gloves that went up to her elbows, as well as a pretty tiara quite fitting for a duchess.

The Netflix star gingerly lifting the hem of her gown off the floor as she headed down the steps of the building, getting into the elegant carriage.

She did not have co-star Regé-Jean Page by her side as it was previously revealed his character, Simon Basset, is not returning for season two.

Phoebe described Rege-Jean’s exit as ‘a spanner’ even though she had been given a heads up that he was planning to leave.

However she shared with Variety: ‘I think fans of the books know that every [season] is about a different sibling. And we’re very much passing the baton to the lovely Johnny, who plays Anthony. Obviously it’s sad to to see [Rege-Jean] go but I’m looking forward to being reunited with my with my family.’

One star who is returning is Jessica Madsen as the haughty Cressida Cowper who played a huge role in Daphne and Simon tying the knot, as she was the one who caught them kissing at a time when Daphne was being courted by Freddie Stroma’s Prince Frederick of Prussia.

Jessica was pictured filming a scene in which Cressida, holding a pamphlet (more gossip from Lady Whistledown?), had an animated chat with two of her peers.

Bridgerton season two will introduce fans to a host of new characters, some of whom have already begun filming on location.

Among the new faces are Melissa Advani as Lady Eaton and Priya Kansara as her daughter Miss Eaton.

The new season, loved by fans for its costumes and sizzling chemistry between its stars, will continue its conversation about race as Anthony and Kate navigate high society.

A description of Simone’s character reveals: ‘Newly arrived in London, Kate is a smart, headstrong young woman who suffers no fools — Anthony Bridgerton very much included.’

The show’s creator Chris Van Dusen previously confirmed that Simon and Phoebe will pop up a lot less going forward.

Chris shared: ‘Season two we’re really going to be with the eldest Bridgerton brother. We left him at the end of the first season in a bit of a crossroads so I’m looking forward to jumping in and discovering how he fares on the marriage market.’

Bridgerton season one is available to stream on Netflix.