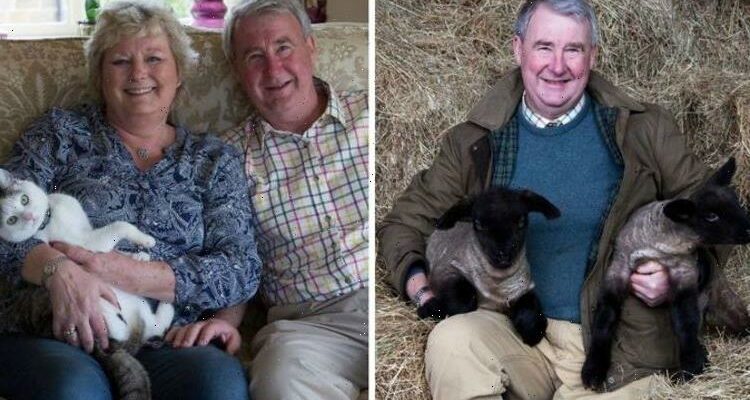 Peter Wright has been in The Yorkshire Vet from the very beginning, having previously spent almost four decades working at Skeldale Veterinary Centre. The Channel 5 series saw Peter make the big career move and leave Skeldale behind but the docu-series continues to follow his work. While there have been changes in his professional life, Peter’s personal life has remained as it has always been.

When Peter first started his career at Skeldale Veterinary Centre, he worked under the legendary Alfred Wight.

He became better known by his pen name James Herriot, having written the All Creatures Great and Small book series which has been adapted into a series on Channel 5.

Roughly at the same time that Peter started working at Skeldale, he met the love of his life in Lin.

They first met back in 1984 at a party and have been loved up ever since.

Speaking on Our Great Yorkshire Life on Channel 5, he said as he celebrated his 35th wedding anniversary: “I met Lin in the December and we were engaged the next Valentine’s Day so it was pretty quick but she has been a constant support to me throughout my career.”

Lin puts the secret of a successful marriage down to teamwork. She said she was given the option of an engagement ring or an electric washing machine and she opted for the washing machine.

Lin explained to Daily Mirror: “We met at a joint work do, where my dentist’s office mixed with the local vet’s on the same street.

“There was a spark straight away but, oddly for our first date, he took me to an abattoir.

“An old cow who couldn’t be used for meat was being slaughtered.

“Peter wanted to observe and work out what was wrong with the cow. I waited for him outside. It didn’t get much better as it went on, really!”

This means they would have been about 27 and 25-years-old respectively when they met.

And just six weeks after Peter and Lin first met, they decided to take the next big step and move in together.

The Yorkshire couple had their daughter Emily before getting married.

Once they did tie the knot, Peter and Lin also welcomed their son Andrew into the world.

Lin has been by Peter’s side for most of his career and before retiring, she worked as a receptionist at Skeldale.

So it’s no wonder the pair have lived a long and happy life together.

The Yorkshire Vet was last seen at the end of 2021 for its Christmas special on December 14.

The series will be returning in 2022 for not one but two more seasons, fans will be delighted to know.

However, a start date has not yet been confirmed for season 14 of The Yorkshire Vet.

Our Great Yorkshire Life is on tonight at 8pm on channel 5.