Sacré bleu, “Emily the Criminal” has been confused with yet another project, this time courtesy of Paul Schrader.

The Academy Award-nominated filmmaker shared on Facebook that he waited to watch the indie thriller starring Aubrey Plaza after assuming it was connected to Netflix series “Emily in Paris.” The Lily Collins-led viral series returned for a third season December 21, while film “Emily the Criminal” is also streaming on the platform.

“I didn’t take notice of ‘Emily the Criminal’ because I somehow confused it with ‘Emily in Paris.’ So it slipped past,” Schrader wrote. “When I sobered up enough to realize they were two different films, I watched. What an impressive feature debut! Assured, smart, constantly pushing the narrative. Writer/director John Patton Ford is the real jones.”

The “Master Gardener” director continued, “So I read some of the interviews he’s given. Also impressive.”

“Shaun of the Dead” director Edgar Wright mixed up “Emily the Criminal” earlier this year with “Tomb Raider,” teasing Plaza that she resembled Lara Croft in the poster for the film.

Plaza’s cover story for MovieMaker magazine and stern-faced, tank top-clad look is what led Wright to reach out.

“My friend Edgar Wright actually saw that and texted me and said, ‘Oh my god, you’re the new Lara Croft? You’re the new Tomb Raider?’ That’s the character in ‘Tomb Raider.’ And I was like, ‘No, Edgar. That’s my movie, ‘Emily the Criminal,’” Plaza shared during “The Tonight Show With Jimmy Fallon.“

Plaza added, “And he genuinely thought I was cast as the new ‘Tomb Raider.’ And then I looked it up and they actually are casting this role right now. And I was like, ‘Well there you go. The new Tomb Raider, whatever.’”

Even Wright tweeted that it was “100 percent true” about believing Plaza was going to be Lara Croft.

“Emily the Criminal” premiered at the 2022 Sundance Film Festival. IndieWire’s Kate Erbland wrote in her review that Plaza’s performance as a credit card fraudster “goes to her darkest territory to date, seamlessly blending the edges of an ‘unlikable’ character with her own persona.”

Erbland penned, “She’s got an edge, but dammit if you can’t root for her. The problem with Emily: No one has rooted for her for so long, and it’s high time she start doing it for herself.” 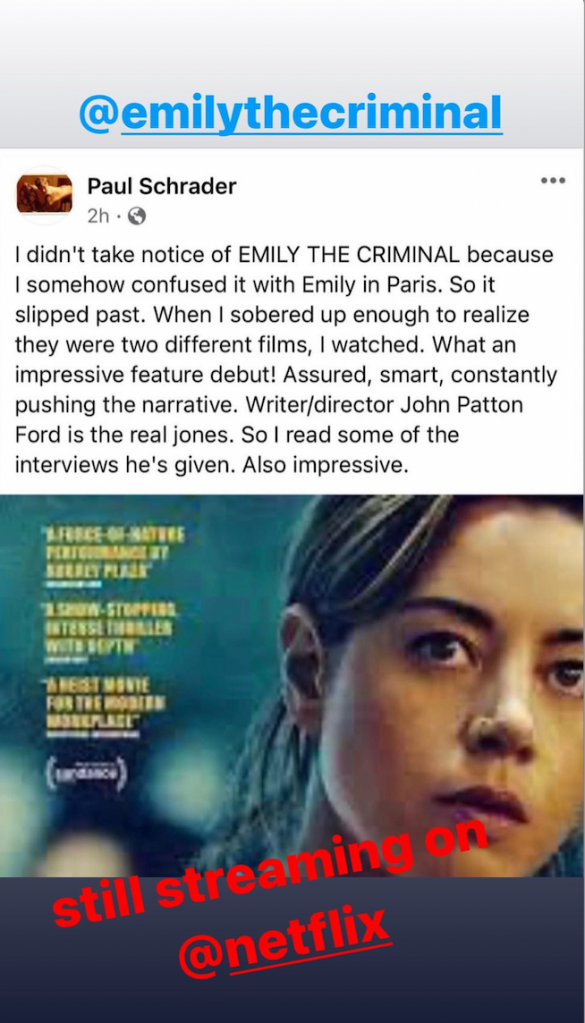