While simultaneous release of films to streaming platforms and at cinemas became common amid COVID-19 pandemic, the ‘Wonder Woman 1984’ director does not think it would last forever.

AceShowbiz -Patty Jenkins doesn’t believe it “make sense financially” to release movies on streaming services and in cinemas at the same time.

The “Wonder Woman 1984” helmer isn’t a fan of the format of releasing blockbusters to streaming platforms and at cinemas simultaneously – which became the norm amid the COVID-19 pandemic with the closure of theaters – will “last” forever, because it’s not viable for the industry to give up millions of dollars at the box office to pay the likes of Netflix and HBO Max.

“I don’t think it’s going to last,” she told the Hollywood Reporter. “Streaming is great, but everybody is chasing it for financial reasons and I don’t think the financial support is there to hold up the industry the way that it is.”

“It’s one thing if it was only Netflix, but now every company has streaming. People are not going to subscribe to that many. Are studios really going to give up billion-dollar movies just to support their streaming service? Financially, it doesn’t make sense.”

The 49-year-old director insisted going to the cinema will never go out of style.

“People like to go to the movies,” she added. “It’s not because they couldn’t see movies at home. We’ve always been able to watch movies at home. It’s nothing new. I think it’s totally coming back.”

“Wonder Woman 1984 was made available on HBO Max on the same day the Gal Gadot-starring superheroine sequel was released in cinemas.

Patty previously made a plea for movie fans to watch the follow-up to 2017’s “Wonder Woman” at theaters.

Responding to Warner Bros.’s decision to release the flick to streaming apps and cinemas, she wrote, “THE TIME HAS COME. At some point you have to choose to share any love and joy you have to give, over everything else. We love our movie as we love our fans, so we truly hope that our film brings a little bit of joy and reprieve to all of you this holiday season.” 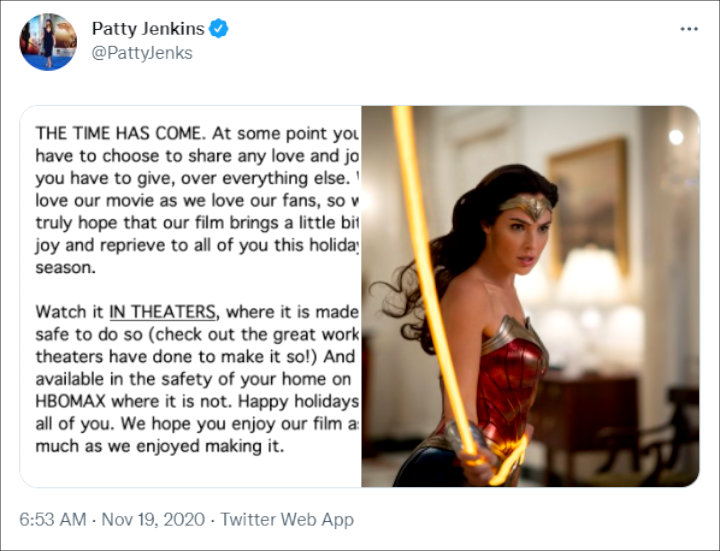 “Watch it IN THEATERS, where it is made safe to do so (check out the great work theaters have done to make it so!) And available in the safety of your home on HBOMAX where it is not. Happy holidays to all of you. We hope you enjoy our film as much as we enjoyed making it. [sic]”