Cannes 2021: Veteran director Jacques Audiard’s film has poise and style, but you can go in with high hopes and still leave wanting more 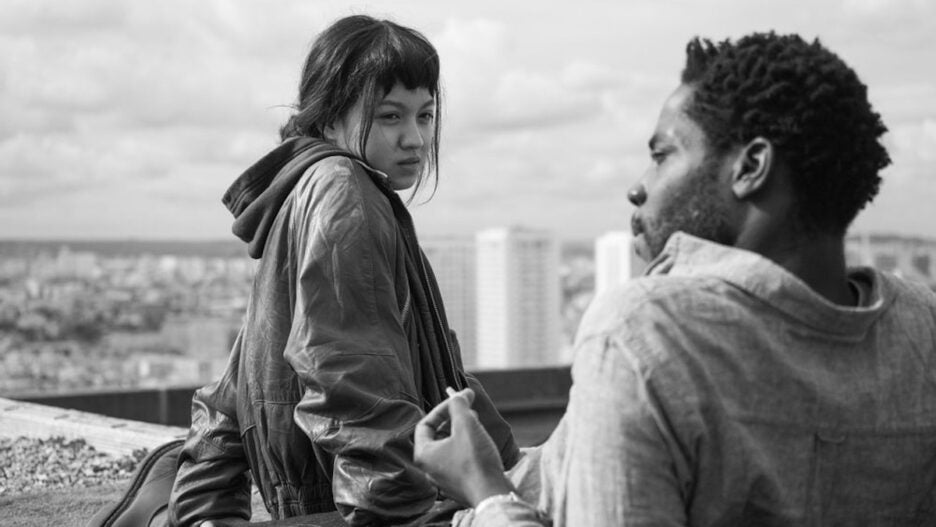 “Paris, 13th District” starts with cool black-and-white drone shots of a concrete estate in the 13th arrondissement of Paris, and it comes from the hand of Palme d’Or winning director Jacques Audiard (“A Prophet,” “Dheepan”). So one could be forgiven for anticipating a tough, urban movie in the ground-breaking mold of Mathieu Kassovitz’s 1995 drama “La Haine.”

However, the opening montage of Woody Allen’s “Manhattan” is closer in spirit to this latest entrant in the Cannes competition, which premiered on Wednesday night. The unrest and turbulence in “Paris, 13th District” (titled “Les Olympiades,” after the name of the estate block, in French) is all of the heart.

Audiard’s film is a network of interconnected stories about various young, multi-cultural Parisians living in the tower blocks, based on three stories by American illustrator Adrian Tomine, taken from his 2015 collection “Killing and Dying” and transposed to this Parisian quartier.

We follow Emilie, played in a memorable debut by Lucie Zhang, who is third generation Chinese; the character works in a call center and lives in the apartment of her ailing grandmother, who is now in a nursing home. This area is particularly known for its Chinese and Vietnamese communities, and Emilie later gets a job as a waitress in one of its typically large Chinese restaurants.

Before that, though, she rents out a room to Camille (Makita Samba), a handsome black man who’s a high-school teacher working on his doctorate. The two begin a sexual affair but can’t square it with being flatmates and quickly split up.

Then, in a sort of new chapter, a woman named Nora arrives in Paris, excited to have her own flat in this late-’60s effort in urban design – think StuyTown in New York or the Barbican in London – and keen to get started on her law course at the Sorbonne. She’s a mature student who, at the age of 32, has left Bordeaux to begin a new life. But her student days are numbered when she’s cyber-bullied after being mistaken by some fellow students for a sex-cam girl called Amber Sweet.

Nora is played by the luminous Noemie Merlant, one of the stars of “Portrait of a Lady on Fire” by filmmaker Celine Sciamma, who co-writes this script (with Audiard and another French film maker Lea Mysius) and whose earlier film “Girlhood” is recalled in some scenes. Quitting her classes, Nora goes for a job in a local real estate office, which is now being run by … Camille, who also taking a break from his studies to look after the place for a friend. To Audiard’s sure-handed credit, this unlikely coincidence nevertheless feels plausible in such a tightly crammed community.

More bed-hopping ensues, but the sex isn’t as casual and carefree as these characters would like to think. They’re all looking for something, some kind of connection, physical or virtual, through sex, or swiping or, in the case of Nora, Skyping with the actual Amber Sweet (played by musician and Savages frontwoman Jehnny Beth).

A sense of loss creeps in, a passing of the generations. Camille is quietly mourning the recent death of his mother; Nora hides a painful secret; Emilie’s grandma is slipping into dementia.

Audiard handles it all with poise and style, benefiting from some split-screen visuals and the crisp monochrome camerawork of Paul Guilhaume, who shot screenwriter Mysius’ 2017 film “Ava.” (The world of French filmmaking is obviously as intertwined as that of the inhabitants of Les Olympiades.)

Yet it’s hard not to feel disappointed with the film as a whole. The episodic nature means that, despite the frequent physical comings together on screen, it never quite comes together as a drama. You can go in with hopes as high as some of the tower blocks and still leave wanting a bit more, given the pedigree of the talents behind the film and the hip vibe it looks to embrace.

Perhaps it will chime more strongly with Cannes jury president Spike Lee, whose “She’s Gotta Have It” (the director’s black-and-white debut film and his more recent Netflix update on it) also spring to mind.