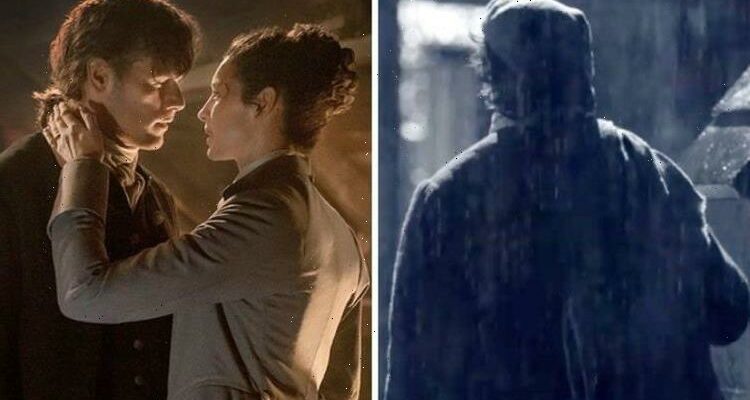 Claire Fraser (played by Caitriona Balfe) and her husband Frank Randall (Tobias Menzies) witness a strange sight in the very first episode of the thrilling Starz series. Before Claire is thrown back in time to 18th Century Scotland, Outlander kicks off with the ghost of her future husband watching her in her bedroom from the streets below.

Fans are still trying to work out the biggest mystery of the series, and have arrived at several theories to explain the bizarre phenomenon.

Author of the original books Diana Gabaldon has confirmed the ghostly figure is indeed the spirit of one Jamie Fraser (Sam Heughan).

Unfortunately, she still hasn’t revealed how he appeared nearly 200 years after his death to seek out Claire.

However, a number of clues laced throughout the novels have given some Outlander enthusiasts some idea as to how he got there.

One eagle-eyed fan recently took to Reddit after spying a key conversation between Claire and Jamie which could be foreshadowing the appearance of Jamie’s ghost.

User Ipiripinapa posted: “Jamie gives us some hints about this at least a couple of times in the books.”

Jamie himself may not be aware of his supernatural destiny, but the story of Outlander is operating within a world where time-travelling magic is a given.

After realising his wife is not from his own time, he swears to wait for her wherever or whenever their souls might end up.

What fans could be glimpsing in the very first episode of the series is Jamie’s soul fulfilling that promise and waiting for Claire throughout her lifetime.

“He tells Claire that he will wait for her after he dies, even 200 years if he has to,” the fan continued.

“His soul has to wait for 200 years because even if they die together in the past.

“Claire also has to die in her own time and that could mean the last time she travels back to the past, if she doesn’t return again at some point and die in her present.”

While Jamie has remained permanently in the 18th Century throughout the series, Claire has travelled back and forth multiple times.

If Jamie dies in the past first, she may decide to return to her 20th Century home to live out the rest of her days in comfort.

Sadly, this gives Jamie’s spirit the arduous task of waiting through two new centuries to meet Claire when she reaches the end of the road.

The fan then speculated: “My question is why is Frank able to see his ghost, what connection is between them?”

“Is there a connection between them, because there are also those references to Frank’s ghost in the past?”

Frank hasn’t appeared in the series for some time, but he clearly has a significant part to play in the series as the only one to witness Jamie’s ghost.

Plus, Claire’s husband appears to have reincarnated throughout her timeline, as his ancestor ‘Black Jack’ Randall bears a striking resemblance, and also has a strong connection with Jamie.

Are fans waiting for one more clue to tie the mystery together, or will their theories hold true once Outlander reaches its final chapter?